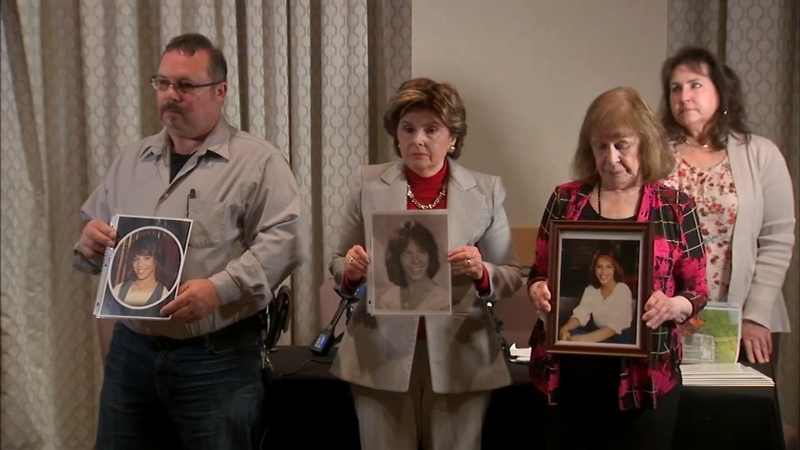 CANTON, Ill. -- A convicted killer said to be part of the notorious "Ripper Crew" was released from prison Friday.

Thomas Kokoraleis, 58, abducted and murdered Lorry Ann Borowski, of Elmhurst, in 1982. She was just 21.

Kokoraleis was a suspected member of the "Ripper Crew," a satanic cult whose members sexually mutilated and killed as many as 20 women during the 1980s.

A member of the so-called Ripper Crew, a satanic cult whose members sexually mutilated and killed women during the 1980s, is scheduled to walk out of prison.

Kokoraleis was released from the Illinois River Correctional Center in Canton, about 30 miles west of Peoria, after serving half of his 70-year sentence. His sentence was reduced due to good behavior.

Attorney Gloria Allred and Borowski's family held a news conference in Rosemont Friday afternoon to speak out about his release.

The family said this is a day they have been dreading.

"I hoped this day would never come, but unfortunately nothing more could be done to prevent his release," said Borowski's brother Mark.

A convicted killer said to be part of the notorious "Ripper Crew" was released from prison Friday.

DuPage County State's Attorney Robert Berlin said his office, in partnership with the Illinois Attorney General's Office, made efforts to keep Kokoraleis behind bars by having him evaluated under the Sexually Violent Persons Commitment Act. Prosecutors could bring a petition classifying Kokoraleis as sexually violent under this law if he had a mental disorder and was found to be highly likely to commit future acts of sexual violence.

However, several psychologists and a psychiatrist determined that Kokoraleis did not meet the necessary criteria to have him held under the SVP Commitment Act, Berlin said, so state law requires that he be released from custody.

The family worries now that Lorry Ann's killer is free. Allred called for changes to Illinois law so that convicted sex offenders are ordered to not have contact with their victim or their victim's family.

"Isn't it enough that Lorry Ann was kidnapped, raped, tortured and suffered more than 20 ice pick wounds to her body and was murdered?" Allred said. "Now her murderer is set free and the law does not even require that her murderer be ordered to stay away from her family."

"I'm shaking at the thought that this murderer is walking free among us," Mark said. "It makes me feel sick to my stomach. My mother and I feel that we need to constantly look over our shoulders."

ABC7 Eyewitness News has learned that Kokoraleis is expected to stay in a Christian-based shelter in Wheaton. He will also be required to register as a sex offender and comply with all laws pertaining to being a registered sex offender, according to DuPage County State's Attorney Robert Berlin.

As of 5:15 p.m. Friday, Kokoraleis had not registered with the Wheaton Police Department and has not made any contact with them, police said. People required to register as a sex offender must register with the law enforcement agency where they live within three days and on an annual basis.

Convicted murderer Thomas Kokoraleis could be free soon. He was a member of the infamous "Ripper Crew" that sexually mutilated and killed several women in the 1980's.

Kokoraleis was sentenced to life in prison for Borowski's killing. But prosecutors allowed him to plead guilty on appeal in exchange for a 70-year prison term. That deal allows for the inmate's release.

Jason Sweat, spokesman for the Illinois Prisoner Review Board, said the state is legally required to release Kokoraleis because he has served the maximum possible amount of time on that sentence.

Kokoraleis was denied release in September 2017 after he failed to find an approved place to live, in violation of parole-eligibility requirements.

The former DuPage County resident is likely to be the only member of the four-man gang who will have a chance to rejoin society.

His younger brother, Andrew, was executed by lethal injection 20 years ago at age 35, prior to Illinois eliminating the death penalty. The other two have used all of their eligible appeals, although one of them will be eligible for parole if he lives to be 89.

Relatives of some of the victims' families were infuriated in late 2017 when they learned of Kokoraleis' expected release. Their efforts led to an 18-month delay of his initial parole date, but authorities said there was nothing else they could do to hold him beyond March 29.

Thomas Kokoraleis, a member of the "Ripper Crew" convicted of sexually mutilating and killing women in the 1980s, could soon walk out of prison.

"He will just walk out of prison - no ankle bracelet, no parole officer. Nothing. It's the worst nightmare you can ever imagine," said Liz Suriano, the victim's best friend.

"I don't know what he's going to do or how his life is going to go, but he should be miserable every day of his life," Mark Borowski said.

Borowski's family said they are willing to testify in Springfield to sway legislators to adopt changes to the law.