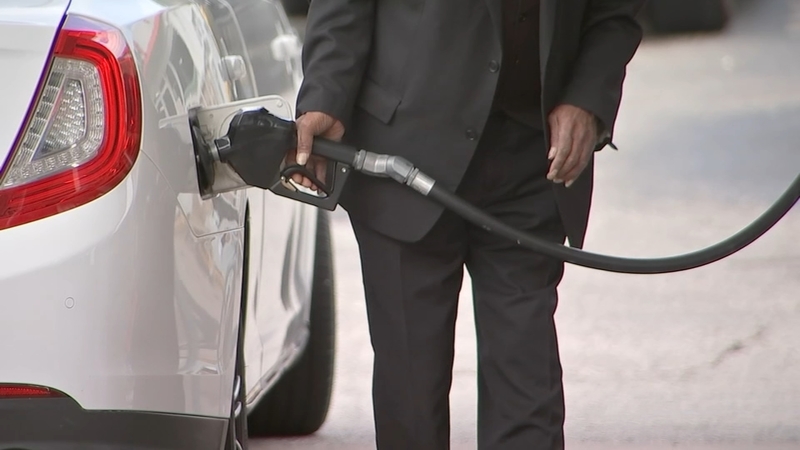 PHILADELPHIA (WPVI) -- A person in a giant bear costume gathered at a Philadelphia gas station Friday afternoon, but no one got suspicious. That is because the bear was giving out free gas.

With current gas prices, consumers will take what they can get for free.

The giveaway was sponsored by car dealer Gary Barbera and the Barbera Cares Program, who partnered with the owner of Marathon Gas station on Academy Road and Grant Avenue in Torresdale to give away 50 gas cards worth $50 each.

"The gas (prices) already went up, so the food been up," said Johnta Isaac of North Philadelphia as he grocery shopped earlier in the afternoon.

Isaac says he spent $38.07 on a few items that only half-filled two bags.

Sharon McDowall of West Philadelphia spent $131.19 on a cart of groceries that she estimates would have cost her less than $90 a year ago.

"It's horrible. You're making life choices between gas and food," said McDowall.

It's the decision more people are facing due to inflation.

"This is the highest price increase in the last 40 years," said Dr. Subodha Kumar, a professor of statistics, operations, and data science at Temple University's Fox School of Business.

Kumar says there are two main factors that play a role in the increased prices.

"One is the supply shortage, and another is the labor shortage," Kumar said.

He also says some companies have taken advantage of the current situation with opportunistic pricing.

"Some companies are misusing this time to increase their prices, even when they should not be," he said.

The higher prices have caused some people to be very strategic with their spending.

"Meat prices have increased...but some fruits and vegetables have decreased," he said.

McDowall has eliminated the cost associated with fast food for her household.

"Kids like to eat out a lot, so now we have eliminated that all together," she said.

But even making meals at home could still break the budget.

The cost of medical care has risen by 3.8%. Transportation costs have increased by nearly 20%. And gas prices have risen 44.2%.

"I'm standing at the gas pump, and people are talking right there. They're talking on social media. They're emailing us," said State Rep. Valerie Longhurst (D-Delaware District 15.)

Delaware lawmakers decided to do something to help residents struggling with the rising costs. The state is giving this year's $200 million surplus back to residents.

"We were able to announce that we'll give every Delawarean a $300 rebate," said Longhurst.

Residents will receive checks as a result of the plan, which has bipartisan support from all four caucuses.

Longhurst thinks the checks could be distributed by the beginning of June. They'll automatically go to anyone who filed a tax return last year.

The rebates will be $300 per person. The state will seek out people who didn't file a tax return to make sure they get their $300 checks too.

"Very few states have been giving it back to people," said Kumar of surpluses that states have.

He estimates prices could continue to go higher before eventually dropping this summer if COVID numbers stay low.

There are no rebates in sight right now for residents of Pennsylvania and New Jersey, leaving residents on their own to cope with the rising price of life.