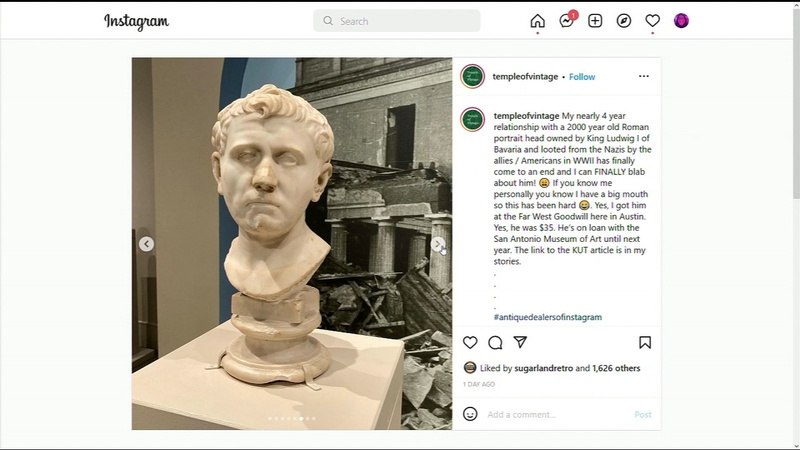 AUSTIN, Texas -- Two thousand years ago in Rome an artist sculpted a marble statue of a general's head. The bust ended up in a Bavarian King's museum in Germany centuries later before disappearing during World War II. Then Laura Young found it at a Goodwill in Austin.

"The head was on the floor under a display table," said Young, who works as an antiques dealer. "It definitely looked old. It was carved marble."

Young bought the 52-pound, 19-inch-tall bust for $34.99 in 2018, sharing photos on her Instagram account of the statue strapped to her backseat with a seatbelt. Another photo showed the statue on an end table in her home wearing a mask.

After bringing it home, she began researching and discovered that the artwork was, in fact, a Julio-Claudian-era bust depicting famed Roman commander Nero Claudius Drusus Germanicus, also known as Drusus Germanicus or Drusus the Elder.

"He's probably the coolest thing I'm ever going to find," Young said. "The most special. There's a lot of history."

How the statue got to Texas is a mystery. Experts believe the bust found its way to Texas thanks to an American soldier stationed in Aschaffenburg during World War II.The statue must now be returned to its rightful owner.

"It's bittersweet because I can't sell him! I am a dealer," Young laughed. "I am trying to make a living!"

Before heading to Germany, Germanicus' bust will be displayed at the San Antonio Museum of Art for one year, starting this week.