The Ukrainian community is asking for unity in prayers in hopes of diplomacy.
WPVI
By Katie Katro and 6abc Digital Staff 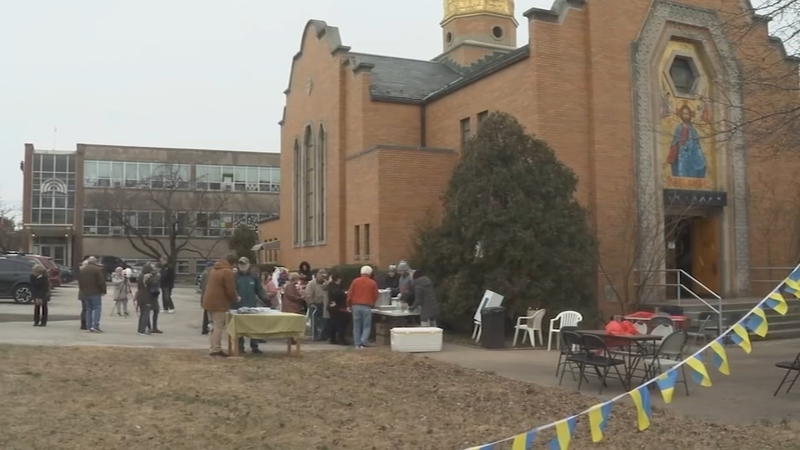 PHILADELPHIA (WPVI) -- People in the Philadelphia area from Ukraine have recently reacted to the growing tensions with Russia.

"Obviously, people are scared. They're afraid. Nobody wants the war. Everybody knows that if it starts, it's going to be a bloodbath," said owner Illya Zayarchenko of Arduour Bakery and Coffee in Ridley Park. "There are very two proud nations, Russia and Ukraine."

Zayarchenko says he knows firsthand what it's like to be involved in war in Ukraine.

While he didn't fight, he made coffee and baked pastries for the soldiers.

"When the war started in 2014 in Ukraine, I got an opportunity to go with my friends to front lines, and you know, bake for soldiers out there," added Zayarchenko.

After having conversations with family back home, Zayarchenko says they are trying to go about their daily lives.

"They're afraid, but at the same time, they're not panicking," he said.

That's also what the priest of St. Nicholas Ukrainian Catholic Church told Action News, as he also has family in Ukraine.

The church provided traditional Ukrainian food and pastries for the Fairmount community Saturday.

"What Ukrainians really want from other countries is support. It's not to do our work instead of us but support us," said Ruslan Borovyi, Priest of St. Nicholas Ukrainian Catholic Church.

The Ukrainian community is asking for unity in prayers in hopes of diplomacy.