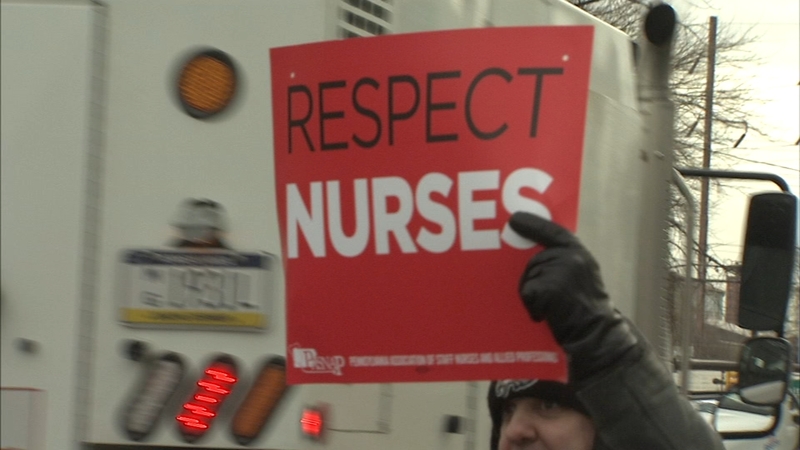 Saint Christopher's Hospital for Children was sold to new owners and now, nurses there say while they were happy with their current contract the new owners are not honoring certain elements, including maintaining the staffing ratios set forth and the paid time off already accrued.

They held a rally outside the hospital on Friday morning.

Pennsylvania Association of Staff Nurses and Allied Professionals (PASNAP) are calling on the new owners -- Tower Health and Drexel University to meet nurses' demands. They want enforceable staffing ratios, meaning a written policy on how many patients each nurse cares for.

"Nurses see these children from the minute they walk in the door to the minute they leave and we oversee every single thing that happens to them. We need to have a seat at the table to decide how many people should be taking care of each patient," said Sue Swift, president of St. Christopher's Nurses Union.

Also on the line is paid time off. They say the new contract doesn't honor the time already accrued.

"Nurses who were out on maternity leave who are not getting paid. They saved up literally years to have enough time to pay themselves for at least three months and utterly it's their money, was ripped from under them," Swift said.

Many in the community, including Rashee Love-Sullivan, are voicing support. He was stabbed last year and says the hospital staff saved his life.

Even though he isn't a child, St. Christopher's was the closest hospital. He drove himself to the emergency room. They stabilized him and he was transferred to the now-closed Hahnemann University Hospital.

"Hearing that hurt my heart because literally, they are the ones who saved my life," he said.