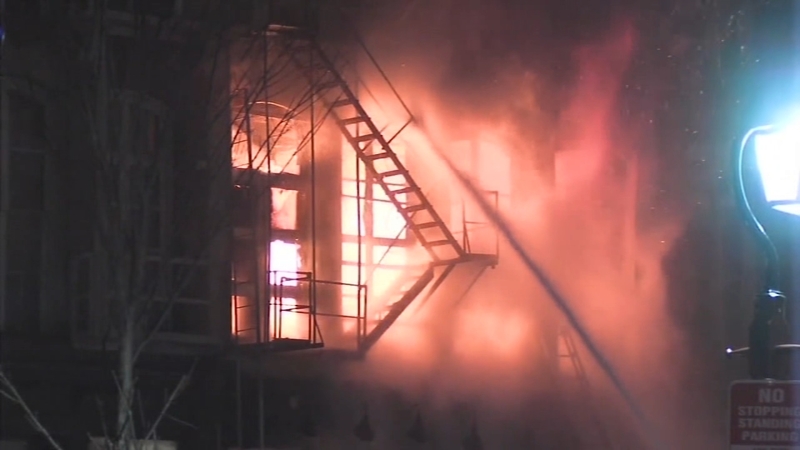 PHILADELPHIA (WPVI) -- Bahaa Dawara was sentenced to nine years in prison plus restitution on Thursday, the second Delaware County brother convicted and sentenced for setting fire to their Old City hookah bar and lounge for insurance money in 2018.

Family members of Dawara and some victims of the fire were in attendance, as well as representatives from agencies including Bureau of Alcohol, Tobacco, Firearms and Explosives, Internal Revenue Services, and the Philadelphia Fire Department.

The judge said he reluctantly accepted the recommended sentence, recognizing the victims' desire to put this case behind them.

"Everyone feels a great deal of relief. This was a massive fire with devastating losses," said Assistant United States Attorney Jeanine Linehan.

"I think for the victims, the trauma of this fire was significant," said Assistant United States Attorney Kate Driscoll.

Driscoll added, "So to have closure, to be able to speak in court this week, was very cathartic to them."

The fire caused staggering damage including destroying a neighboring hotel and homes.

Bahaa Dawara addressed the court, saying in part, "I made a mistake that hurt people, that hurt my family, that hurt myself personally...".

Sanchez said he was "not impressed with his statement that this was a mistake," countering setting the basement fire while people were sleeping upstairs was a "deliberate act".

In Thursday's sentencing hearing, Jessica Morris, the general manager of Best Western Plus Independence Park at the time, spoke about how the fire left the hotel in shambles.

Morris described how staff safely evacuated 72 guests, the work it took to accommodate guests in the following days and months, and how to this day, 25 employees remain without a job. The hotel has not yet reopened.

Four other people testified on Tuesday in Imad Dawara's sentencing, whose comments were considered in Bahaa's sentencing, including Katherine Rubin, who was home alone the night of the fire.

One of two Delaware County brothers convicted of setting fire to their Old City business back in 2018 will spend nearly a decade behind bars.

After sentencing, Rubin explained she was thankful her husband had taken their children to visit his parents that night in 2018.

"It was an exceptionally difficult day and then weeks after, and then years after. We will probably be dealing with it for years to come," Rubin said.

Rubin added, "It's just gratifying to know they finally admit it, and that everybody will know the truth that we have known for years."

The plea agreement included $1 million of restitution to be paid within 90 days of sentencing, with more than $20 million to be paid in the future.

On the request of the victims, the judge will make the recommendation that the brothers not be house in the same facility, but he added it is not in his power to order that.
Report a correction or typo
Related topics:
philadelphiadelaware countyfirearson
Copyright © 2021 WPVI-TV. All Rights Reserved.
TOP STORIES
Firefighter on scene of DUI crash killed by drunk driver: Authorities
What is Pennsylvania's Move Over Law?
Woman killed, 2 men injured in shooting near Temple U.
30-inch water main break floods South Philly homes
What a reaction! Aussie coach erupts after Titmus gold medal
Hero officers, bystanders save mom, baby pinned under car: video
Teenager shot on Fishtown basketball court
Show More
Fauci: CDC may back wearing face masks more
Vigil held for man shot, killed outside of Pat's King of Steaks
Strangers gift $60K to beloved airport piano player after viral video
LeVar Burton taking over as 'Jeopardy!' guest host Monday
AccuWeather: Hot, less humid today
More TOP STORIES News