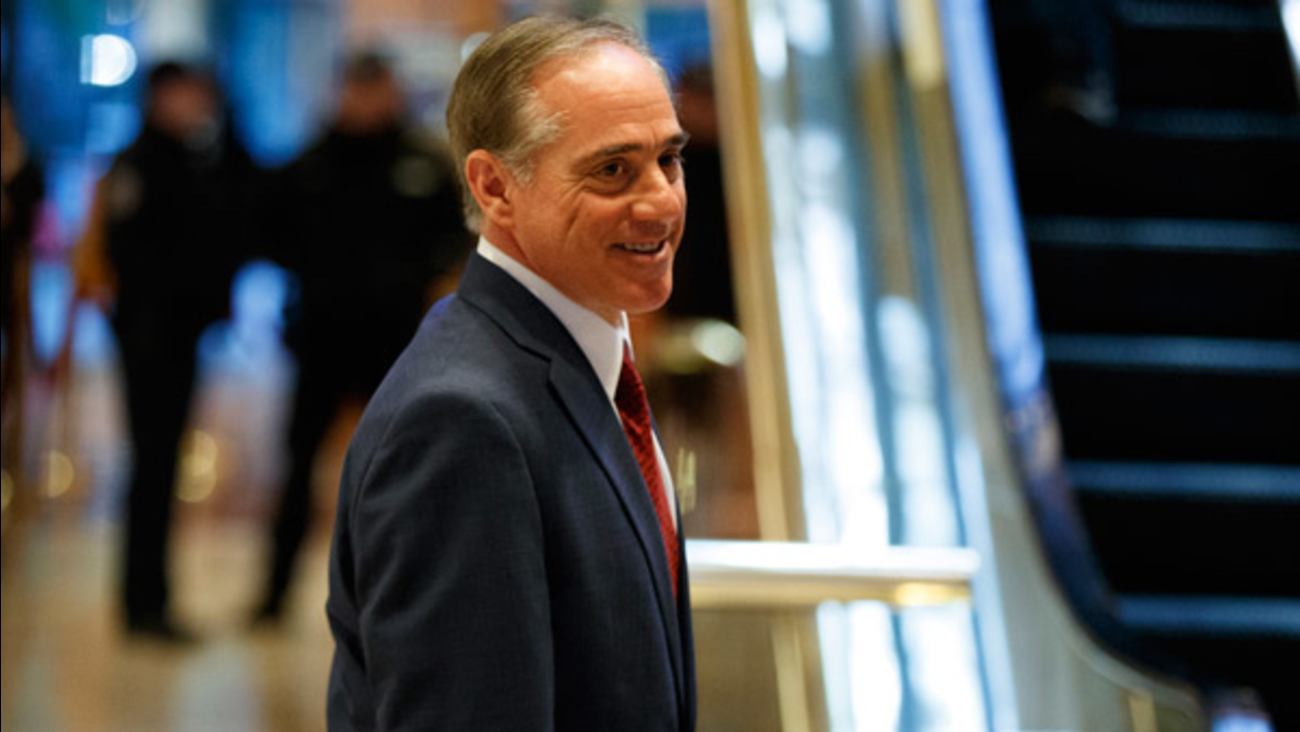 WASHINGTON -- President-elect Donald Trump on Wednesday tapped the Department of Veterans Affairs' top health official to lead a beleaguered agency struggling to meet the health needs of millions of veterans.

David Shulkin's nomination signals a more modest approach to change at the VA after Trump repeatedly pledged an overhaul. During the presidential campaign, Trump described the VA as "the most corrupt agency" and "probably the most incompetently run agency."

If confirmed, Shulkin would have the rare distinction of being an ex-Obama administration official serving in the Trump administration.

Shulkin spent more than two decades in hospital management. The son of an Army psychiatrist, he is a former president of the Morristown Medical Center in New Jersey. He also served as president and CEO of the Beth Israel Medical Center in New York and chief medical officer at the University of Pennsylvania Health System and Temple University Hospital in Philadelphia.

Trump announced Shulkin's selection at a news conference in New York and said he had interviewed at least 100 people for the job.

"Sadly our great veterans have not gotten the level of care they deserve, but Dr. Shulkin has the experience and the vision to ensure we will meet the health care needs of every veteran," Trump said.

The choice is likely to soothe some of the largest veterans organizations and pave an easy path to confirmation in the Senate, where Shulkin was approved unanimously to be undersecretary of health in 2015. Veterans groups and Democrats have praised steps taken by VA Secretary Bob McDonald's team and feared that other possible picks might push for greater privatization. Shulkin has supported closer ties with the private sector, but opposed full privatization.

As undersecretary, Shulkin manages a system responsible for 9 million military veterans in more than 1,700 facilities. He was charged with improving wait times for medical care following the 2014 scandal involving long waits at the Phoenix VA medical center.

"We are both eager to begin reforming the areas in our Veterans Affairs system that need critical attention, and do it in a swift, thoughtful and responsible way," Shulkin said in a statement released by Trump's transition team.

Shulkin would lead the government's second-largest agency with nearly 370,000 employees and an annual budget of nearly $167 billion.

"We're pleased with this decision," said Joe Chenelly, national executive director of AMVETS. "We've been saying all along continuity is important at the VA, and Dr. Shulkin definitely understands the problems at the VA."

Paul Rieckhoff, founder and CEO of Iraq and Afghanistan Veterans of America, said his group will have tough questions for Shulkin. It is concerned about the department being led by a non-veteran.

"He's going to have to explain why he is best-suited for this job," Rieckhoff said.

The nomination comes as the government struggles to find answers to some of the worst problems afflicting wounded warriors.

In a forthcoming report, the nonpartisan Government Accountability Office will place the VA health system once again on its "high risk" list, finding that the VA has made only limited progress since the scandal over lengthy wait-times. Issued every two years, the list identifies troubled federal programs that could cause significant problems due to waste, fraud, mismanagement or structural flaws.

During the campaign, Trump promised to "ensure every veteran has the choice to seek care at the VA, or at a private service provider of their own choice." But he has yet to offer specifics, including how he plans to pay for a ballooning price tag for VA care.

"There is a tremendous amount of work to be done - by the VA and by Congress - to change the paradigm at the U.S. Department of Veterans Affairs," said Sen. Johnny Isakson, R-Ga., who chairs the Senate Veterans Affairs Committee.