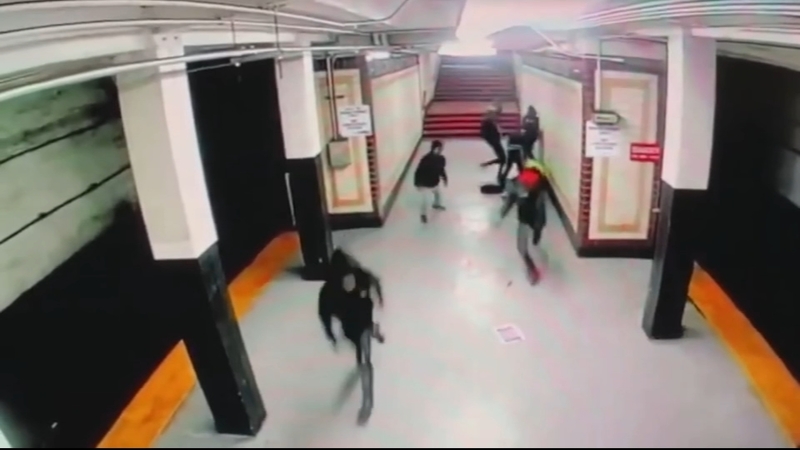 PHILADELPHIA (WPVI) -- Video of a SEPTA employee being attacked in Philadelphia has stirred feelings of shock and outrage.

The footage released Thursday by the Transport Workers Union shows an employee of the buildings and bridges division being swarmed by teenagers in an unprovoked assault.

The unnamed employee is said to be recovering at home with numerous injuries.

"This behavior is completely unacceptable. We don't want our employees or any of our riders to suffer from that kind of behavior," said SEPTA Transit Police Chief Thomas Nestel.

Nestel held a press conference following the release of the video and calls from the union to resign amid allegations police are not doing enough - from policy to transparency - to protect employees and riders.

"SEPTA does not want to report this because it gives them a black eye. I think they are trying to keep it hush-hush," said TWU Local 234 President Willie Brown.

The police chief was quite clear, however, that he has no plans to resign.

SEPTA data given to Action News showed a general decrease in reported incidents against employees for things like harassment, physical assault between 2019 to 2020.

Chief Nestel noted things so far in 2021 are less stable.

The era of pandemic has posed several problems, especially in the realm of mental health.

He said another challenge is making cases against offenders.

The worker's union is not the only group that's now called for a change in leadership.

"I've been around 22 years and this is the lowest I've ever seen it," said Fraternal Order of Transit Police Vice President Troy Parham.

The union has also called for Nestel to step down.

"It's now coming to a head and I think that it's time," Parham said.

Nestel defended his policies and current staffing of officers, which was also called into question.

He said there are also talks of adding unarmed security officers, about 60, at heavily traveled terminals by the end of the month.
Report a correction or typo
Related topics:
philadelphiaseptaassault
Copyright © 2021 WPVI-TV. All Rights Reserved.
More Videos
From CNN Newsource affiliates
TOP STORIES