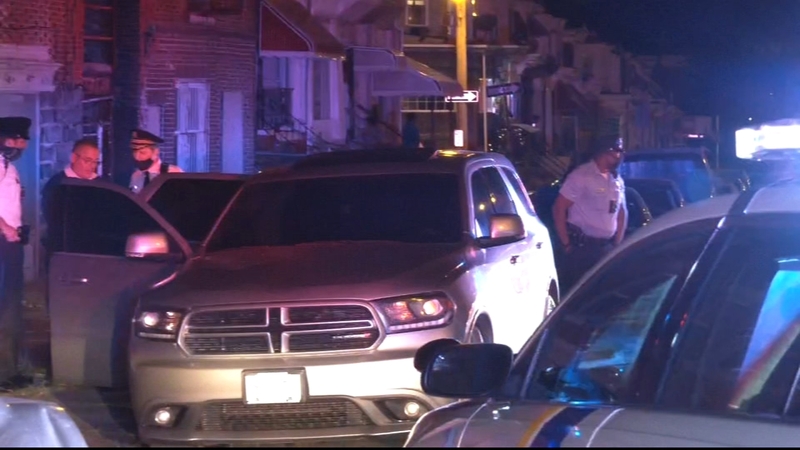 PHILADELPHIA (WPVI) -- On the heels of a deadly weekend that left 25 people shot, the gunfire is showing no signs of slowing down in Philadelphia.

Three people were killed and six others were injured in seven separate shootings across the city since Monday.

One of the murder victims was found shot to death in a stolen SUV.

Police say the SUV with two men inside was shot up around 5 p.m. Monday on the 100 block of East Indiana Avenue in Kensington.

The driver was able to run to safety, right as someone stole the SUV with the shooting victim still in the passenger side.

The owner of the SUV was able to track it down using a cell phone.

It was found nearly five hours later and 15-miles away on the 5600 block of Thomas Street in Southwest Philadelphia.

When police arrived, they discovered the victim dead in the passenger seat.

Police are still looking for the killer.

Five people are dead in a violent weekend in Philadelphia that saw more than 20 people shot.

An Uber driver is recovering from being caught in the crossfire in the city's Mantua section around 8 p.m. Monday.

Police say he was driving two passengers on the 3800 block of Wyalusing Avenue when he heard gunshots.

Bullets hit all around his car.

The 31-year-old driver was hit in the leg and was rushed to the hospital.

The passengers were not hurt.

Around 1:10 a.m. Tuesday, a man was shot while walking on the 800 block of Allegheny Avenue in Kensington.

Police say the victim was approached by another man with a gun who shot him in the thigh.

The victim was taken to the hospital in stable condition. The suspect fled the scene.

Around 7:35 p.m. Monday, on the 5000 block of Wade Street, police say a 17-year-old boy was shot in the face. He was transported to an area hospital where he was placed in critical condition.

Around 5 p.m., a 20-year-old man died after being shot in the face at N 29th and Oakdale streets in the city's Strawberry Mansion section.

#BREAKING: Chopper 6 over the latest homicide in the City of Philadelphia, this time in Strawberry Mansion. Police say a 20 year old man was shot in the face, chest and arm, died at the hospital.@6abc pic.twitter.com/IxrX1HHc26

Less than 10 minutes before the Oakdale Street shooting, police say two people were shot on the 3400 block of N Howard Street at 4:56 p.m.

And just before 4 p.m., police say a double shooting turned deadly on the 3100 block of Jasper Street.

A 20-year-old man died after being shot in the chest.

The shooting also injured a 28-year-old man. He is currently listed in stable condition at an area hospital.

#BREAKING: Gun violence continues in Philadelphia...this time claiming the life of a 20 year old man. This is happening on the 3100 block of Jasper Street in Kensington. A second victim, a 28 yr old man, is stable. @6abc pic.twitter.com/GUyDUAtP15