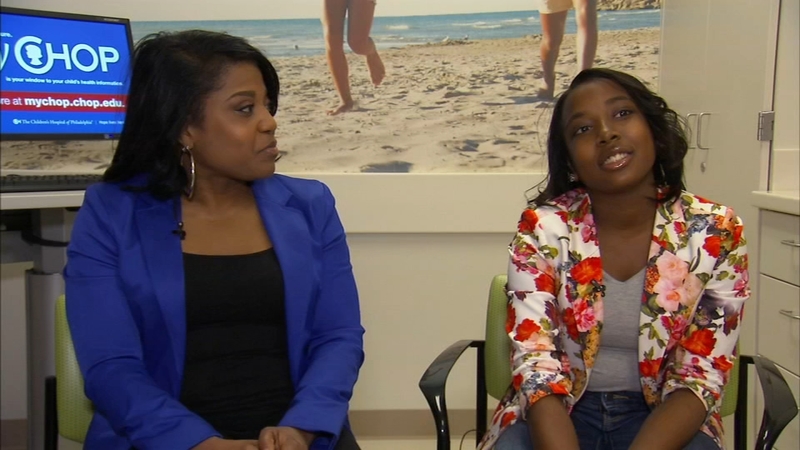 A revolution in care has tripled life expectancy, however, it's still deadly.

This year, Children's Hospital of Philadelphia is devoting the proceeds from its Daisy Days to the sickle cell center, to push promising research to a cure.

It could benefit children like 12-year-old Caylin Bolden, a chef-in-the-making.

She's among the 100,000 Americans with sickle cell disease.

It's an inherited blood disorder, found mostly in those of African, Hispanic, Mediterranean, and Middle Eastern descent.

They can block smaller blood vessels, and scar the insides of larger vessels.

"The organ damage, to the eyes, the lungs, other tissues in the body, including the brain," says Dr. Smith-Whitley.

Aggressive preventive care has spared Caylin and many other kids with sickle cell disease most of the frequent hospital stays so common in the past,

"Sickle cell disease in childhood is so much different now," note Dr. Smith-Whitley.

"Before we had newborn screening, we would see infants come to the emergency department with overwhelming infections," recalls Dr. Smith-Whitley.

And the medication hydroxyurea reduces pain episodes, though Caylin has had some.

"When I get them in my chest, it's like you can't breathe," she notes.

A simple non-invasive test called TCD (transcranial Doppler) is preventing strokes, which are one of the primary dangers from sickle cell.

"The same tool that you would use to look at babies in the womb can be used to determine if a child with sickle cell disease is at risk for stroke," she says.

With ultrasound, it measures how fast blood flows in large vessels of the brain.

If the flow is too fast:

"We know that child has a 40% chance of having a stroke in the next 3 years," says Dr. Smith-Whitley.

With monthly transfusions and apheresis - to get sickle cells out, and more normal ones in, strokes in high-risk kids have been cut by 92%.

Bone marrow transplants can be a cure for sickle cell disease, however, most children don't have a sibling or other family member that's a perfect match.

So researchers at CHOP are now pursuing 2 potential ways to do them more easily, successfully, and with less trauma for patients.

Dr. Stefano Rivella has a gene therapy trial underway, to turn off the mechanism in bone marrow which generates sickle-shaped red blood cells.

Dr. Smith-Whitley explains, "You can actually take out the bone marrow cells that are going to grow up to be red blood cells, tweak the DNA code that is programming them to make hemoglobin, and change the code to make another type of hemoglobin that prevents the sickle hemoglobin from acting as badly."

"And you give those cells back to the individual living with sickle cell disease," she continues.

"A sickle cell patient could, in a sense, be their own bone marrow donor," says Dr. Smith-Whitley.

"The promise of gene therapy helps those that are already living with sickle cell disease," she says.

In another, Dr. Alan Flake is working on bone marrow transplants in the womb - so babies would never develop sickle cell.

"Before the immune system develops, wouldn't it be nice to give that individual the transplant, so they don't recognize the bone marrow cells as being unlike their own," she says.

"To be born disease-free is the best," notes the doctor.

During May, anyone can fight sickle cell, AND boost their own fitness, by taking the Daisy Days 31-Day Challenge.

You can walk, jog, or run anywhere during the month of May.

Get pledges for yourself, or join a team, and then tally up the miles and donations.