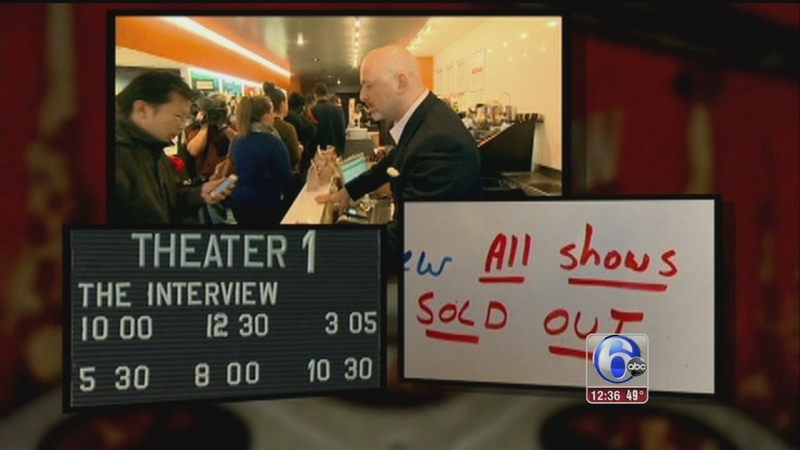 NEW YORK -- Critics and early viewers agree that "The Interview" is less than a masterpiece. But thanks to threats from hackers that nearly derailed its release, it has become an event.

Hundreds of theaters Thursday, from The Edge 8 in Greenville, Alabama, to Michael Moore's Bijou by the Bay in Traverse City, Michigan, made special holiday arrangements for the Seth Rogen-James Franco comedy depicting the assassination of North Korean leader Kim Jong Un. Sony Pictures had initially called off the release after major theater chains dropped the movie that was to have opened on as many as 3,000 screens.

But with President Obama among others criticizing the decision, Sony officials changed their minds. "The Interview" became available on a variety of digital platforms Wednesday afternoon, including Google Play, YouTube Movies, Microsoft's Xbox Video and a separate Sony website. Meanwhile, Sony and independent theaters agreed to release it in over 300 venues on Christmas.

"We are taking a stand for freedom," said theater manager Lee Peterson of the Cinema Village East in Manhattan, where most of Thursday's seven screenings had sold out by early afternoon. "We want to show the world that Americans will not be told what we can or cannot watch. Personally, I am not afraid."

At Atlanta's Plaza Theater, a sell-out crowd Thursday hailed the film's release, washing down popcorn with beer and cocktails and uniting for a boisterous sing-along of "God Bless America" before the opening credits.

"This is way more fun than it would have been," said Jim Kelley of Atlanta, who waited outside with his daughter, Shannon. The elder Kelley added, with mocking sarcasm, "This is almost dangerous, like we're living life on the edge."

Some venues showing "The Interview" were more likely to feature documentaries about North Korea than a low-brow comedy about it. At the Jean Cocteau Cinema in Santa Fe, New Mexico, owned by "Game of Thrones" author George RR Martin, the schedule also includes the Spanish art-house release "Flamenco," the locally made "The Twilight Angel" and an Italian film festival. The Film Society of Lincoln Center, which begins screening "The Interview" on Friday, will soon be hosting a tribute to "Force Majeure" director Ruben Ostlund of Sweden and a documentary about the late Nobel laureate Isaac Bashevis Singer.

The back story of "The Interview" has itself played out like a Hollywood satire, in which a cartoonish farce distracts from some of the holiday season's most prestigious films: "Selma," the drama about the 1965 civil rights march; Angelina Jolie's adaptation of the best-selling World War II story "Unbroken"; and the all-star, big-screen version of Stephen Sondheim's "Into the Woods."

Security was light at many theaters, with the occasional police officer on hand. The possibility of violence was taken more seriously by the movie industry than by government officials. Last week, the Department of Homeland Security released a statement saying that there were no credible threats.

Meanwhile, Darrell Foxworth, a special agent for the FBI in San Diego, said Wednesday the agency was sharing information with independent movie theater owners showing "The Interview" out of "an abundance of caution" and to educate them about cyber threats and what help the FBI can offer.

Kim Song, a North Korean diplomat to the United Nations, condemned the release Wednesday, calling the movie an "unpardonable mockery of our sovereignty and dignity of our supreme leader." But Kim said North Korea will likely limit its response to condemnation, with no "physical reaction."

Decisions to show the movie through the Internet could open up companies to hacking. Xbox and PlayStation's online gaming services were down Thursday afternoon but the cause was unclear. Meanwhile, YouTube and other Google products were not having any disruptions. A Microsoft spokesman confirmed the Xbox outage but declined further comment. Sony PlayStation representatives did not immediately respond to inquiries.

In Little Rock, members of an Arkansas family who say they otherwise would have never seen "The Interview" were among the first patrons at the Riverdale 10 theater. Kay Trice and her husband drove an hour from Stuttgart, Arkansas, to see the movie with their daughter and appreciated "the freedom to see it."

"It should be shown in this country and somebody in North Korea should not have the right to scare us out of seeing this," Trice said.

A few dozen people lined up early outside Tempe, Arizona's Valley Art theater, where tickets for all five showings on Thursday had sold out. "There are a lot of people going crazy over (the controversy). It's bigger than the movie," said Omar Khiel, 20.

At the Cinema Village theater in Manhattan, the 10 a.m. screening was near capacity. Derek Karpel, a 34-year-old attorney, said that "as many people as possible should go see it. In fact, the government should subsidize tickets to make that possible."

But he wasn't about to call "The Interview" a national treasure.

"No one should go into expecting it to be a serious commentary on politics," he said. "But it's fun. People should go."

Jonathan Lemire and Scott Mayerowitz in New York, Eric Tucker in Washington, Bill Barrow in Atlanta, Kelly Kissel in Little Rock and Alina A. Hartounian in Tempe contributed to this report.