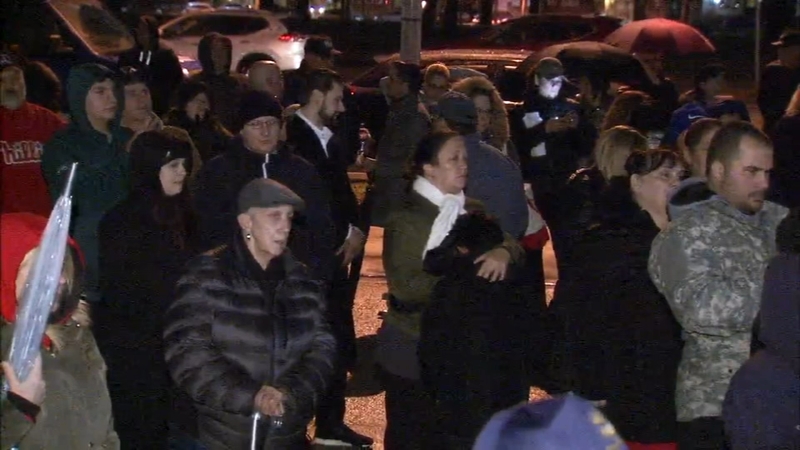 PHILADELPHIA (WPVI) -- Dozens of residents gathered in South Philadelphia to stand up against a crime spike plaguing the city.

"I think South Philadelphia is forgotten right now and we're trying to get the neighbors together to stand up and unite," said resident Andrew Dankanich.

Monday night's event was organized by Anthony Giordano on Facebook.

"We're here to stand up and unite South Philadelphia and, hopefully, if this catches on, we unite the entire city." Giordano said.

While Giordano didn't point any fingers, Councilman David Oh did.

"I've spoken to him about it and I'm saying publicly we have crime epidemics because they're not nipping these things in the bud, people aren't feeling safe," said Oh.

Barry Collins of South Philadelphia said, "I feel the police are almost handcuffed themselves to really do their job properly."

The DA's office disagrees strongly, saying in a statement, "Violent crime incidents are down historically in this area since DA Krasner took office in 2018. In fact, we are charging at a higher rate for firearms offenses than our predecessors."

The DA's spokesperson also commented on those "quality of life crimes" Oh spoke about. The DA's office pointed to property crimes going down in the 1st district and, in their opinion, quality of life crimes are sometimes based on perception, not actual data.
Report a correction or typo
Related topics:
philadelphiacrimecommunity
Copyright © 2021 WPVI-TV. All Rights Reserved.
More Videos
From CNN Newsource affiliates
TOP STORIES