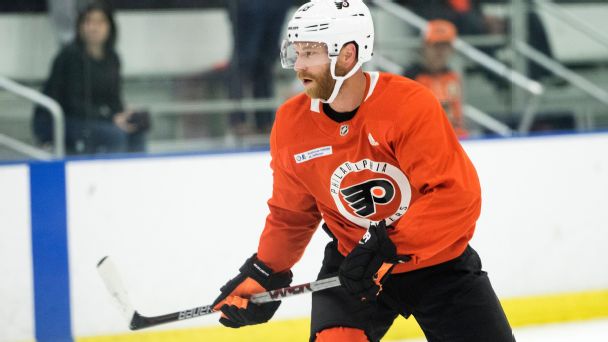 Biggest changes: In what has been a revolving door of mediocrity, the Flyers' goaltending situation might be no better with newcomer Brian Elliott than it was last season with Steve Mason. Elliott, who split time last season with Chad Johnson with the Calgary Flames, represents the biggest offseason acquisition for the Flyers. He signed an affordable two-year, $5.5 million contract. And he is expected to share the net with Michal Neuvirth, who signed a two-year, $5 million extension in March. The Flyers also picked up depth center Jori Lehtera in a deal that sent center Brayden Schenn to the St. Louis Blues and yielded the Flyers a pair of first-round draft picks. Lehtera began training camp on a line with fellow Finn Valtteri Filppula. Lehterais looking to rebound after a seven-goal season. The Flyers also lost depth forwards Pierre-Edouard Bellemare and Nick Cousins, and they parted ways with defenseman Michael Del Zotto, opening the door to a fresh crop of prospects, none more intriguing than Nolan Patrick. If the Flyers hope to return to the playoffs for just the third time in six years, Patrick has to play a big hand in a resurgence. Many believe Patrick, the second player taken in the 2017 draft, has the skill level to play top-six minutes this season, and there appears to be a spot for the 19-year-old pivot on the Flyers' second line. If he is fully recovered from June 13 hernia surgery, Patrick is almost a lock to make the big club. A strong collection of rookie defensemen that includes Samuel Morin, Robert Hagg, Travis Sanheim andPhilippe Myerswill battle for spots on a young blue line anchored by Ivan Provorov, 20, and Shayne Gostisbehere, 24.

Case for: On paper, the Flyers look like a team caught between building around players in their prime -- veteran forwards Claude Giroux, Wayne Simmonds andJakub Voracek-- and one in complete rebuild mode. If second-year forward Travis Konecny (11 goals in 2016-17) can double his offensive output as a top-line left winger, and if rookie Oskar Lindblom can be just as dominant in his first NHL season as he was in his last season in the Swedish Elite League (22 goals, 47 points in 52 games), and if Elliott and Neuvirth can erase a high percentage of mistakes made by a young defensive corps, the Flyers have a shot at sneaking into the playoffs. Simmonds is coming off a pair of dominant seasons in which he has averaged 31 goals and 57 points, becoming a goaltender's worst nightmare in the crease.

Case against: If Giroux, Simmonds or Voracek regress in any way, it could be another short season in Philly. At 29, Giroux should be in the prime of his career. But with five years remaining on a contract that carries an $8.3 million cap hit, many are beginning to wonder if the captain is approaching the twilight of his career. Giroux is coming off his worst statistical season (14 goals, 58 points) since his first full season in the NHL in 2009-10. His nine even-strength goals and 26 even-strength points also are career lows. Many blamed Giroux's poor season on offseason hip surgery and a rehab cut short by the World Cup. It's no coincidence that Gostisbehere, who also underwent offseason hip surgery, also lacked the jump needed to be the dominant player he was as a rookie. The Flyers simply don't have enough reliable forwards, defensemen and goaltenders to make a serious run this season, but they are certainly headed in the right direction.

Trade bait: The Flyers have three players entering the final year of their contracts, and all three could be on the block if the team is out of the playoff picture in late February. Filppula, 33, carries a $5 million cap hit but could be a valuable addition for a Stanley Cup contender. Matt Read, 31, is more reasonable at $3.625 million, but he has not shown he can score consistently. Defenseman Brandon Manning, 27, would be a cheap pickup at $975,000 for a team looking for blue-line depth.

Goalie situation rating: 4. Only four teams in the East surrendered more goals than the Flyers did last season. The club is hoping Elliott can recapture the form he showed in St. Louis two seasons ago, when he went 23-8-6 with a 2.07 goals-against average and a .930 save percentage. Neuvirth has the talent to be a 1A goalie, but he tends to be streaky and has battled injuries throughout his career. It is not a coincidence that both have two-year deals, since the Flyers are grooming Carter Hart, Alex Lyon and Anthony Stolarz to compete as their future No. 1.

Scout's take: "They're tough to figure. They seem to be a team in between, in terms of where they were a few years ago and where they are now. They were a very difficult team to play against a couple years ago. And they seem to be rebuilding with some key players getting a little older. I think it's going to be a struggle for them to get in."