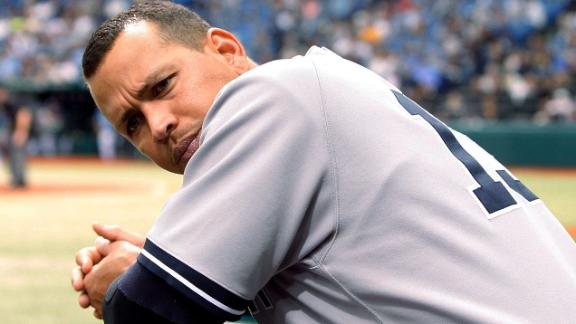 ESPN
By Andrew Marchand
NEW YORK -- In a 90-minute meeting at Yankee Stadium on Tuesday, Alex Rodriguez apologized to New York Yankees owner Hal Steinbrenner and team executives for his suspension for performance-enhancing drug use and the hostile nature in which he attempted to defend himself.

The two sides released a joint statement on Tuesday evening, saying Rodriguez "initiated the meeting and apologized to the organization for his actions over the past several years."

Sources told ESPNNewYork.com that the Yankees made it known that he had to make up for his behavior, which included suing Major League Baseball and the Yankees' team doctor, as well as questioning the Yankees' integrity in the Biogenesis case, among other things.

The Yankees, sources said, also made it clear to Rodriguez that they plan on disputing his home run bonuses. Rodriguez, who has 654 career homers, can make a total of $30 million extra if he reaches five separate home run milestones, starting with tying Willie Mays' 660 homers for fourth place on the all-time list.

If Rodriguez were to reach Mays' mark, he would be due another $6 million. The Yankees feel the mark is worthless because of Rodriguez's history with steroids and other PEDs.

The Yankees also told Rodriguez that they would like him to clear the air with the media prior to pitchers and catchers reporting on Friday, Feb. 20. Sources told ESPNNewYork.com that Rodriguez was amenable to that timetable. No date or arrangement has been set yet. A-Rod will be the one to orchestrate the setup.

The Yankees owe Rodriguez $61 million over the next three seasons, not counting the potential home run bonus money. They signed Chase Headley for four years and $52 million to play Rodriguez's position of third base. Rodriguez could be the DH or could earn more playing time by showing he can still catch up to fastballs even while turning 40 this summer and missing nearly two years. He also could receive more time in the event of injuries.

Rodriguez now has two legs of his apology tour done. He first said he was sorry to commissioner Rob Manfred. A-Rod has met with Manfred three different times since the suspension went into place. Tuesday was the first time the Yankees' top brass got together with Rodriguez.

"Today we held a meeting at Yankee Stadium between Hal Steinbrenner, Randy Levine, Brian Cashman, Jean Afterman, Alex Rodriguez and Jim Sharp," the Yankees said in a statement. "Alex initiated the meeting and apologized to the organization for his actions over the past several years.

"There was an honest and frank discussion on all of the issues. As far as the Yankees are concerned, the next step is to play baseball in spring training."

A-Rod, Yankees Meet
ESPN's Buster Olney discusses Alex Rodriguez's meeting with the Yankees today and his role with the team this season.