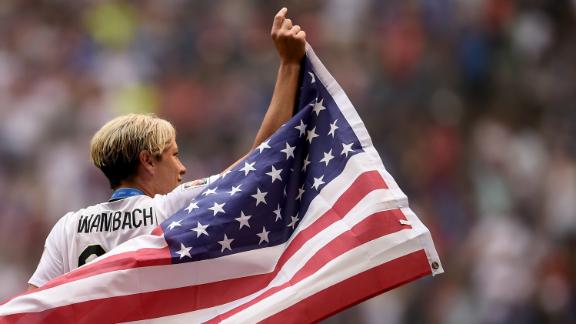 Abby Wambach is leaving her game just the way she wanted to: As a champion.

The leading career scorer -- male or female -- in international soccer, Wambach announced her retirement on Tuesday shortly after the U.S. national team celebrated its Women's World Cup victory at the White House.

Wambach, 35, said before the World Cup this summer in Canada that she wanted to cap her 15-year career with the game's most prestigious championship.

She got her wish. The United States claimed its third overall World Cup title, and first since 1999, with a 5-2 victory over Japan.

The prolific scorer, named the 2012 FIFA Player of the Year, has 184 goals in 252 international matches.

She will play the final four matches of the national team's 10-game victory tour before stepping down. Her final match will be Dec. 16 against China in New Orleans.

"After much deliberation and talking with my friends, family, teammates and our coaching staff, I've decided to finally bring my soccer career to an end," Wambach said in a statement. "While we still have more work to do for women's soccer, after bringing the World Cup back to the United States this summer, I'm feeling extremely optimistic about the future of our sport. It's been an amazing, wonderful ride and I can't wait to see what the next chapter of my life brings."

Wambach appeared in four World Cups with the national team. She also has a pair of Olympic gold medals from the 2004 Games in Athens and the 2012 Games in London. She did not compete in the Beijing Games because of a broken leg.

Perhaps one of her most famous goals came in the quarterfinals of the 2011 World Cup in Germany, when she scored the equalizer against Brazil in the 122nd minute.

Overall, she's also the leader in multiple-goal games with 45, including two four-goal games and a five-goal game.

She joins Mia Hamm as the only Americans to win FIFA's player of the year honors.

Before she announced her retirement, Wambach and her teammates were feted by President Barack Obama at the White House.

Following the ceremony, Wambach took a selfie with Obama and her teammates.

The United States dominated Japan in the World Cup title game after a monthlong tournament that crisscrossed Canada. Carli Lloyd was named the tournament's MVP after scoring three goals in the span of 16 minutes in the final match.

Wambach saw her role with the team change during the World Cup. She came in off the bench in several matches, sacrificing a starting role for the good of the team.

"I just have this belief system, and I've talked about it my whole career, that it takes a whole team. It's not about one person. It will never be about one person in a team sport," she said before the final match.

Wambach made it her mission throughout her career to help grow the women's game, and to fight for equal rights for female athletes. She led a group of players in protesting FIFA's decision to play the 2015 World Cup on artificial turf, which is considered by many players to be inferior to grass. In the end, the tournament was still held on the fake grass, but Wambach had made her point.

"What she has done for women's soccer and women's sports overall with her amazing talents on the field and her personality off it has been inspiring to watch," U.S. coach Jill Ellis said. "I am just extremely happy that she could end her career with that elusive World Cup title and go out on top, right where she deserves to be."

Wambach, who is scheduled to speak before the National Press Club in Washington, D.C., on Wednesday, thanked her fans with a tweet: