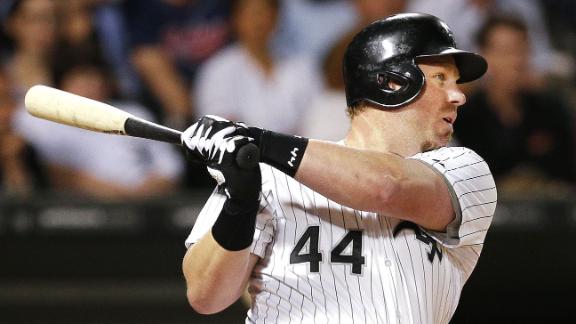 CHICAGO -- Adam Dunn's first opportunity at a playoff appearance will also be his swan song as the slugger announced Sunday he plans to retire at the conclusion of the season on the same day the Oakland Athletics acquired him in a trade with the White Sox.

"This is probably going to be it," said Dunn, who doesn't think he can be talked out of his retirement plan. "I've been playing a long time and haven't got this opportunity, so I'm going to try to make the most of it."

After hitting one out of the park on Saturday off Max Scherzer, Dunn has hit 20 homers in 12 of the last 13 seasons. Since 2000, only David Ortiz and Albert Pujols have more.

Oakland will pay approximately half of the remaining $2.5 million owed to Dunn this season, sources told ESPN The Magazine's Buster Olney.

"It really feels like Opening Day," Dunn said. "It's a really good shot in the arm, for me especially. It's pretty easy waking up this morning and knowing you're going to be somewhere tomorrow that has a legitimate chance to do something that you've worked your entire career to do. Now I'm getting a chance."

White Sox manager Robin Ventura said Dunn will be missed in the clubhouse.

"Well, I mean, great teammate. Those are the things, for me, that are really important things that people don't see, is him inside the clubhouse, just kind of how to act, how to go about your business and be accountable," Ventura said. "I think he's one of the best I've ever been around for that, so I'm happy that he gets to go somewhere and get a chance to make it to the playoffs. But he's a guy that came in and I know that for all three years, he's been a leader."

"Yeah, I mean, I'm not going to beat around the bush and say the four years here was great, because it was, um ... it was just bad," Dunn said. "I did it completely to myself. I don't blame anyone, I blame myself. But I met a lot of great people here. I wish things would've worked out better, but it didn't."

Because of a no-trade clause, Dunn had to approve the move to Oakland, a team with great need right now.

The Athletics lead the majors in runs scored, but rank only 20th in runs in August, following the trade of Yoenis Cespedes for Jon Lester on July 31.

White Sox captain Paul Konerko said he understands the desire to go to a contender.

"Who knows what he's going to do in the future, next year and all that, so he might be looking at it like, 'This is the only chance I have to go do it.' You definitely can't blame him for that," Konerko said. "I definitely hope that happens for him because that's a feeling every guy should get before he gets out of the game."

The White Sox also had conversations Sunday with the Los Angeles Dodgers about Dunn, according to sources.

In order for a player to be eligible for a postseason roster, he must be a member of the playoff team by Aug. 31, which is why the Athletics needed to acquire Dunn on Sunday in order to have him available for the postseason.