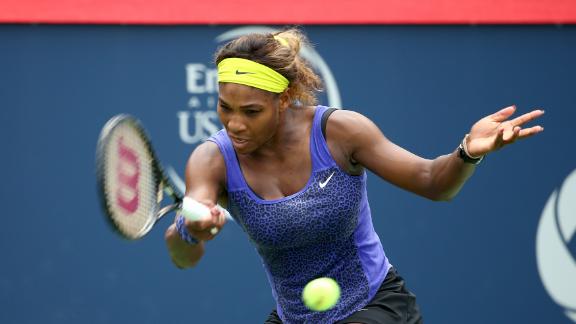 MONTREAL -- Serena Williams and Venus Williams set up an all-Williams semifinal in the Rogers Cup.

The sisters advanced to their 26th career meeting Friday, both rallying to win their quarterfinal matches in the hard-court event. Serena beat Caroline Wozniacki 4-6, 7-5, 7-5, and Venus topped Carla Suarez Navarro 4-6, 6-2, 6-3.

The 32-year-old Serena has won the last five matches against 34-year-old Venus to take a 15-10 edge.

"I definitely don't like playing her," said Serena, No. 1 in the world for the 200th week in her career. "I think I've lost to her more than anyone on the tour, so it's definitely not a fun match.

"I have to play well," Venus said. "There's no secret or science to it. I think anyone who has got any wins against her, they've pretty much played the match of their life. Granted, I'd like to imagine that I won't have to play the match of my life. That's tough to do. But I know I need to play well."

They first met in the second round of the 1999 Australian Open, with Venus winning in two sets.

"I totally remember," Venus said. "We had a tough match back then. That's the trend that started and it hasn't changed. I suspect this will be another tough match."

Serena, the defending champion, extended her Rogers Cup winning streak to 14 matches after victories at the 2011 and 2013 events in Toronto. She skipped the 2012 tournament.

Wozniacki, coming off a win at Istanbul, had won eight straight matches.

The match lasted 2 hours, 41 minutes, with Wozniacki taking control in the first set and building a 2-0 lead in the second before Serena started hitting the lines.

"I was making a lot of unforced errors in general," Serena said. "But I just thought, Just keep fighting. Hopefully I can just hold on and hold on, try to break, keep going for each shot.'

"I just never wanted to stop and tried to do the best that I could."

She broke service for a 3-2 first-set lead and fought off two break points to close the set.

Serena had a prime chance to break at 2-1 in the second set, but hit a soft volley that Wozniacki was able to return. But she came back with a break to make it 4-4 and broke again to even the match.

Serena is 7-1 Wozniacki. The American won at Stanford last week in her first tournament since withdrawing from a doubles match at Wimbledon because of equilibrium problems.

"Especially when you play someone like Caroline or other opponents, you know your match might be a little longer than normal," Serena said. "You go in there thinking: This is not going to be routine.' You're ready."

Wozniacki was happy with her tournament despite the loss.

"It was really small things that did it out there today," she said. "She came up with quite a few big serves when she needed to. It could have gone both ways. I had a break in the second set. Didn't manage to hold on. But I gave it everything I had. It just wasn't quite enough."

Serena Into All-Williams Semifinal
Serena Williams beat Caroline Wozniacki in three sets in the Rogers Cup quarterfinals to set up a semifinal match against her sister Venus.