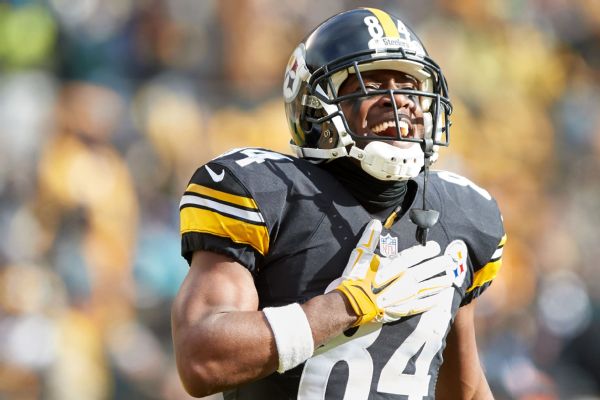 Antonio Brown was one of four repeaters from last season on the Associated Press 2017 NFL All-Pro Team, and the only unanimous choice.

The Pittsburgh Steelers' star receiver drew all 50 ballots Friday from a nationwide panel of media members who regularly cover the league. Brown missed the past two-plus games with a calf injury.

The repeaters from 2016 were Brown, Hekker, Rams interior defensive lineman Aaron Donald, who got 49 votes, and Seattle linebacker Bobby Wagner, who earned his third selection.

"When you get voted for these types of awards," Wagner said, "it shows you all the work you do in the offseason, the grinding, all the things you push through. ... When you get this, when people say this is not AFC, NFC, this is the league, this is who we deem the best at their position in the league, that says a lot.

"Dang, that's crazy. It means a lot, honestly," said Gurley, who likely would have led the league in rushing had he played in L.A.'s finale. "It's a blessing. I've got so much respect for everybody in this league, and to be in this position just means so much to me.

"I've been following people around the NFL my whole life, and to be considered as an All-Pro, man, God is good, honestly. Honestly."

Three Steelers joined Brown on the roster: Le'Veon Bell as the flex, interior defensive linemanCam Heywardand right guard David DeCastro. No other team had more than two All-Pros, with the NFC getting 18 players and the AFC 10.

The stunning turnaround by the Jaguars also was recognized, as rarely does Jacksonville have members of the elite All-Pro squad. For 2017, they have two: edge rusher Calais Campbell and cornerback Jalen Ramsey.

"It's huge," Campbell said. "That's a big testament to the work we put in. We don't just show up and perform. We grind day in and day out to be the best. This defense is very special, so I'm glad to see us get some accolades for our hard work."

Campbell and Ramsey helped the Jaguars rank first in pass defense and second overall, earning their first playoff berth since the 2007 season.

Two rookies made it: punt returner Jamal Agnew of Detroit and special-teamer Budda Baker of Arizona.