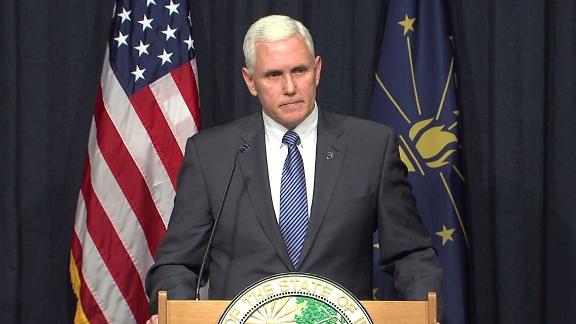 Indiana's new religious objections law, which could allow businesses to discriminate against gay people, continued to be a talking point in the sports world Friday.

Michigan State president Lou Anna Simon, meanwhile, told ESPN at halftime of the Michigan State-Oklahoma Sweet 16 game Friday night, "Our commitment to diversity remains unchanged. It's something for the Big Ten to think about as we (school presidents and chancellors) meet (in June)."

NCAA headquarters, meanwhile, have been a mainstay in downtown Indianapolis since 1999, and the city will host the men's Final Four next weekend.

As to whether the law should affect the NCAA tournaments being held in Indianapolis in the coming years, including the 2016 women's Final Four, Simon, a former leader of the NCAA Board of Governors, said, "We have to look at this and make sure it reflects our values.''

The measure, which takes effect in July, prohibits state and local laws that "substantially burden'' the ability of people -- including businesses and associations -- to follow their religious beliefs.

Some national gay-rights groups say lawmakers in Indiana and about a dozen other states proposed such bills this year as a way to essentially grant a state-sanctioned waiver for discrimination as the nation's highest court prepares to mull the gay marriage question.

The new law in Indiana could put the NCAA in a difficult position. While it has a close relationship with Indiana's capital city, college sports have been at the forefront of several breakthroughs for gay rights in the last two years, and the young adults and college students the NCAA represents have generally been supportive of those changes.

In a statement Thursday, NCAA president Mark Emmert said the organization was "especially concerned" about how the law might impact student-athletes and employees.

"Discrimination in any form is unacceptable to me," Barkley said in a statement. "As long as anti-gay legislation exists in any state, I strongly believe big events such as the Final Four and Super Bowl should not be held in those states' cities."

"I've never been big into politics but I'm very disappointed in my adopted home state of Indiana and the passing of Senate Bill 101," he said. "I've always been about inclusion for all, no matter your skin color, gender or sexual preference. We are all the same people, beautiful creatures."

Information from ESPN.com's Andy Katz and Adam Rittenberg and The Associated Press was used in this report.