Bernard Tomic fined $10K for rant at US Open heckler 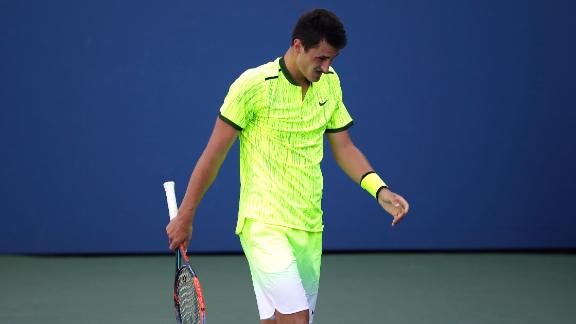 NEW YORK -- Bernard Tomic has been handed a $10,000 fine for his foul-mouthed rant at a US Open heckler.

The controversial Australian told the fan to "suck my b----" on the Old Grandstand court in his first-round loss to Damir Dzumhuron Tuesday. Television microphones also picked up Tomic telling the spectator "I will put my b---- in your mouth" and "I will give you some money to make you feel good."

Tomic later apologized for his comments, but ITF officials deemed the expletive-laden rant to be unsportsmanlike conduct.

The 23-year-old insisted he was provoked, telling the chair umpire the fan "was saying some s---."

"I think he was just baiting me a bit," Tomic later told a press conference. "I don't want to get into it. I apologized for what I said to him. I think after he left after the first set, I think the crowd got happy he left because he was a bit annoying."

Tomic's fine is not the biggest at a Grand Slam this year -- Britain's Heather Watson received a 9,000 ($12,000) fine for slamming her racket into the turf at Wimbledon during a first-round defeat.

World No. 1 Serena Williams was fined the same amount of money as Tomic at the All England Club for smashing a racket, as was Viktor Troicki for calling official Damiano Torella "the worst umpire in the world" at the grass-court major.

Tomic was criticized at the Madrid Open in May when he held his racket by the strings and didn't offer a shot to Fabio Fognini's serve on match point. He responded to a journalist who questioned his actions: "Would you care if you were 23 and worth over $10 million?"

He also ruled out himself out of consideration for Olympic selection in Rio after being warned by the Australian team that his behavior was being monitored.