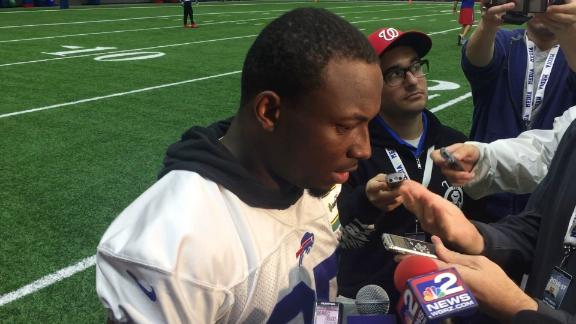 ORCHARD PARK, N.Y. -- Buffalo Bills running back LeSean McCoy, who is listed as questionable with a hamstring injury, returned to practice on a limited basis Friday.

Coach Rex Ryan, however, said the Bills have yet to rule McCoy out for Sunday's game against theMiami Dolphinsand that he will"probably" be a game-time decision.

"We'll see how it goes," Ryan said. "We'll be smart with him, but he looked pretty good [Friday]."

McCoy, speaking Friday for the first time since suffering the injury in practice Wednesday, also considered himself a game-time decision.

"I just felt all right," McCoy said of his return to practice Friday. "I didn't do a lot of reps today. Just was real limited, just seeing how I feel. We'll see what happens [at Saturday's walk-through practice]."

A well-placed source told ESPN's Josina Anderson on Thursday that McCoy will not playagainst the Dolphins. McCoy has a history of hamstring injuries.

However, McCoy said Friday that his injury this week was "not nearly as bad as [last year]. So that's a good thing."

Given McCoy's experience with his injury last season, offensive coordinator Anthony Lynn said Thursday that he wants his top running back to be cautious with the injury and not play at less than 100 percent, potentially risking reinjury.

In addition to McCoy being listed as questionable, the Bills listed wide receiver Robert Woods (foot) and defensive tackle Marcell Dareus (hamstring) as doubtful on their injury report after neither player practiced this week.

If the Bills are without McCoy, the team is expected to start Mike Gillislee at running back. Marquise Goodwin and Justin Hunter would be expected to take the majority of snaps at receiver if Woods cannot play.

Dareus has yet to play this season because of a four-game suspension and the hamstring injury that has kept him out of the past two games.