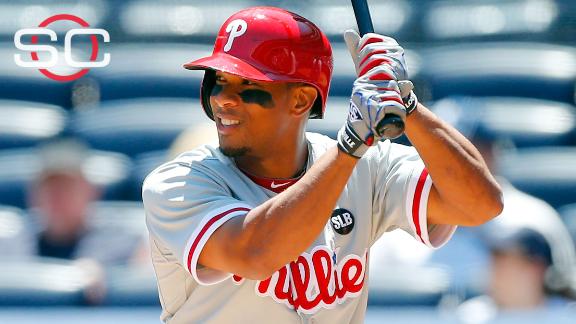 The Toronto Blue Jays added another piece to their revamped roster, acquiring speedy OF Ben Revereand cash considerations from the Philadelphia Phillies, the teams announced Friday.

Revere, 27, is batting .298 and has 24 steals this season. He is the only player with 20 or more stolen bases in each of the past five seasons.

"[Revere] was someone that brings an element to our lineup that we don't have: a contact bat with speed," general manager Alex Anthopoulos said.

Over the past four seasons Revere hit .301 with 48 doubles, 22 triples and 135 stolen bases for the Phillies.He led the National League in hits last season with 184.

"I kind of like the way it's set up now," Gibbons said.

Revere is eligible for arbitration after the season.

The move comes on the heels of the Jays picking up ace left-hander David Price from the Detroit Tigers, Tulowitzki and reliever LaTroy Hawkins from the Colorado Rockies, as well as setup man Mark Lowe from the Seattle Mariners.

"[Lowe's] having an outstanding year," Anthopoulos said. "Our bullpen is really starting to be deep with power arms."

Anthopoulos has overhauled a fifth of his roster in a bid to put the Blue Jays in the postseason for the first time since they won consecutive World Series titles in 1992 and '93.

"Alex isn't letting up, I know that," manager John Gibbons said. Anthopoulos, who stayed up all night Wednesday working on the Price deal, said his week has been "a whirlwind."

"We're excited, and I love the fact that we were in a position to do some things and be this close," he said.

Toronto won 7-6 in 11 innings over the Kansas City Royals on Friday and is six games behind the AL East-leading New York Yankees, which routed the Chicago White Sox 13-6. The Blue Jays are a game back in the wild-card race.

The Blue Jays also agreed to a deal with the Athletics just before the deadline, sending left-handed starter Felix Doubront, who was designated for assignment on Wednesday, to Oakland in exchange for cash.

The clubs announced the trade Friday. The A's will make a 25-man roster move when Doubront reports to Oakland, which is hosting Cleveland this weekend. He will help fill a void in a rotation that lost lefty Scott Kazmir in a trade to his hometown Houston Astros last Thursday.

Doubront, 27, has split time between Toronto and Triple-A Buffalo this season. He was 1-1 with a 4.76 ERA in five games with four starts while with Toronto. In nine total starts with Buffalo, he was 1-3 with a 2.44 ERA and struck out 43 batters in 48 innings.

Doubront was the odd man out after the Blue Jays acquired shortstop Troy Tulowitzki this week.