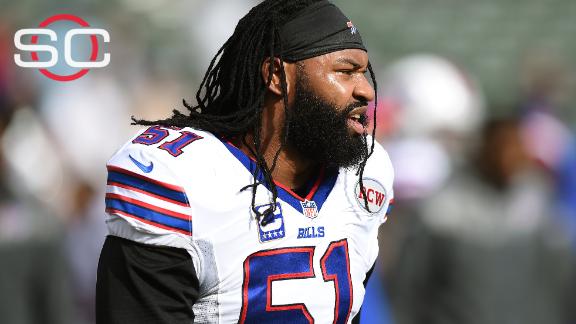 Free-agent linebacker Brandon Spikes, who spent a portion of the 2015 offseason with the New England Patriots, has been suspended for the first four weeks of the 2015 season, according to a league source.

The reason for Spikes' suspension and four other free agents' suspensions was not disclosed on Tuesday. In July, Spikes pleaded guilty in a hit-and-run crash in Massachusetts that injured three people and was sentenced to a year of probation.

Spikes, a 2010 second-round pick out of Florida, was re-signed by his original team this offseason after spending the 2014 season in Buffalo. After the incident, the Patriots released Spikes, and he has remained unsigned since then. He played in 16 games for the Buffalo Bills last season, totaling 54 tackles.

Another former Bill, wide receiver Mike Williams, was also suspended, as he will miss the first six weeks of the 2015 NFL season for an undisclosed issue. Williams, a once-promising wideout for the Tampa Bay Buccaneers, played in nine games for Buffalo last season but managed just eight receptions.

Running back Jonathan Dwyer, who was placed on the non-football injury list by the Arizona Cardinals last season after a domestic-violence-related arrest, has been suspended for three weeks. He pleaded guilty to a misdemeanor and was sentenced to 18 months' probation in January.

Outside linebacker Jermaine Cunningham, most recently with the New York Jets, has been suspended for six weeks. In May, he pleaded guilty to three charges in connection with a domestic dispute, including invasion of privacy, and admitted to posting revealing photos of a woman online without her consent.

Rodney Austin, who played for the Lions from 2012 to 2014, has been suspended for six weeks. In June, he was found guilty of four charges, including assault on a woman and a child under 12, in a North Carolina courtroom.

The NFL's list of suspended players to begin the 2015 season is now more than 40 players.