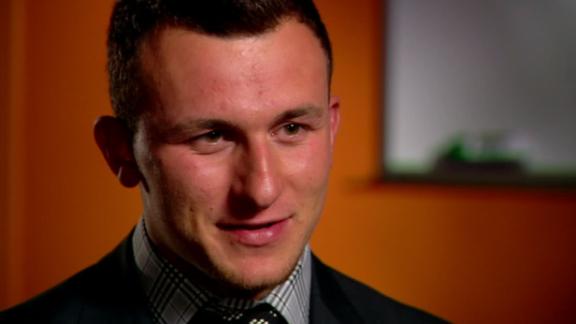 Haslam praised Manziel for being an "ultracompetitor" but reiterated that Brian Hoyer is the team's starting quarterback and Manziel will have to beat out the veteran in training camp. Haslam made it clear that Manziel "is not the starter. Johnny's the backup."

Haslam spoke on Manziel while addressing a luncheon in Canton, Ohio, at the Pro Football Hall of Fame. The owner said the team was not scared off by the celebrity that comes along with Manziel, adding that the Browns told Manziel "this is not Hollywood" and that he will have to come to Cleveland ready to work hard.

Manziel's new teammates are happy to have him, but they're not ready to anoint him as the Browns' starter at quarterback.

"I think good old Johnny Football is going to be a good addition to Cleveland," center Alex Mack said Monday. "Don't know who the starter is going to be, though."

"Coach [Mike] Pettine talked about drafting competition, and I think he stuck to that," tight end Jordan Cameron said. "It seems like it's going to be a lot of competition. We'll see how that battle goes."

Players spoke before the 15th annual Cleveland Browns Foundation Golf Tournament, which identified education for Cleveland youth as its mission this year.

Players on hand acknowledged that Manziel brings a ton of excitement to the team and city, but they were not assuming native son Hoyer's days as the team's No. 1 were already done.

"Hoyer's going to come out fighting," linebacker Jabaal Sheard said. "I'm not worried about that."

"There's no handing over of the job," Cameron said.

Players also treated the celebrity and TMZ-like attention that Manziel brings to the Browns with shrugs.

"If we win games and he's playing, then it doesn't matter at all," Cameron said.

"It'll help sell tickets, which will make a lot of people smile in the building," Pro Bowl tackle Joe Thomas said. "That's a good thing. ... New England is probably the most secretive of any NFL program, and they still have Tom Brady doing Ugg commercials. He has TMZ following him everywhere he goes.

"It's just a matter of how the player handles it. I don't know Johnny and I haven't met him, but I'm sure he'll have a lot of guidance in how he handles things around here with the attention he's getting."

One player, linebacker Craig Robertson, had a request: "Definitely hook us up with Drake."

Information from ESPN.com's Pat McManamon and The Associated Press was used in this report.

Manziel Focused On Winning
Browns QB Johnny Manziel discusses the experience of being drafted in the first round, whether slipping to the No. 22 pick will motivate him, playing with the "it factor," bringing a winning attitude to Cleveland and competing against Brian Hoyer.