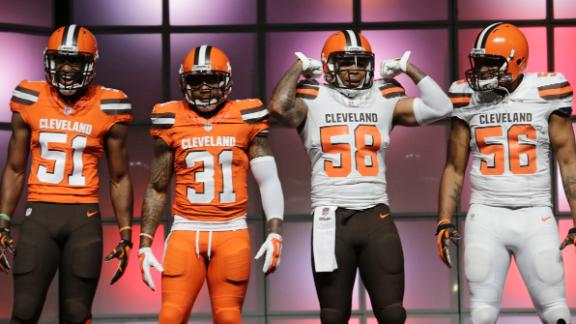 
Knocked on social media for unveiling subtle changes to the helmet and logo in February, the Cleveland Browns revealed a complete jersey overhaul Tuesday night, including several exclusive features among NFL teams.


The Browns showed nine new uniform combinations to about 3,000 fans and representatives inside the Cleveland Convention Center, the culmination of a two-year project with Nike designed to honor the city of Cleveland.


The jerseys say "CLEVELAND" in bold, block lettering across the front, a first for the 69-year-old franchise. The Browns will be the only team in the league to display these three features: the city's name across the front, cross-stitching in the jersey and the team's nickname on the pant leg.


"We could be like Oregon of the NFL," team president Alec Scheiner said of the flexibility to wear different versions of orange, brown and white.


Well, without the chrome helmets.


The helmet has a matte finish with three stripes of equal size through the middle, while the inside of the jersey's neckline says "Dawg Pound" in brown letters.


The crowd cheered but didn't exactly roar in jubilation when the players unveiled the jerseys. The changes did leave the players happy.


"Honestly, I haven't heard anybody that didn't like the uniforms, which is good," Thomas said. "Usually everybody's got some beef."

The old jerseys looked "a little boring," said Whitner, who embraces the changes.


"I love having Cleveland on the front, and I bet the majority of the fans [love it]," Whitner said. "When you hear Cleveland, you know where that is on the map."


NFL creative director Shandon Melvin said the designers considered adding a fourth color to complement orange, white and brown but "we couldn't find a meaning" to do so. The Cleveland lettering and the stitching, for example, are a tribute to the hardworking nature of the city, designers say. The all-brown and all-white combinations are expected to be the primary home and away uniforms, which would leave the all-orange as the alternate, to be used up to twice per season.


The rebranding project also included revamped logos, which were released Feb. 24. The Browns went with a richer orange color for the helmet -- Pantone 2028 C -- along with a brown face mask, which the Browns haven't used on the field since 1962.


The famed Dawg Pound face has a new design of a smirking Swagger dog to commemorate the 30th anniversary of the Dawg Pound. The team changed the traditional block lettering to something "cleaner, simpler, elegant," Scheiner said.


At the time, Scheiner promised significant changes to the uniforms.


"The changes that they've made here, I think you see the tradition in the jersey but it's also new and it's different," outside linebacker Barkevious Mingo said Tuesday. "Different is sometimes good."


Scheiner said the team consulted fans throughout the process and got permission from them on "how far we can go."


"[The jerseys are] a nice combination of a link to our history and then kind of moving the team forward and matching the city's transformation," Scheiner said.


Dealing with jersey leaks that surfaced in the days before the event, Scheiner said some issues were inevitable. The jerseys indeed looked better in person than on retail hangers in low-resolution pictures.


"I'm not sure anyone that's had a project this big where there weren't some things got out," Scheiner said. "We're just focused on people getting to see the whole uniforms in its entirety."