Bucs kicker Roberto Aguayo bounces back to go 6-for-6 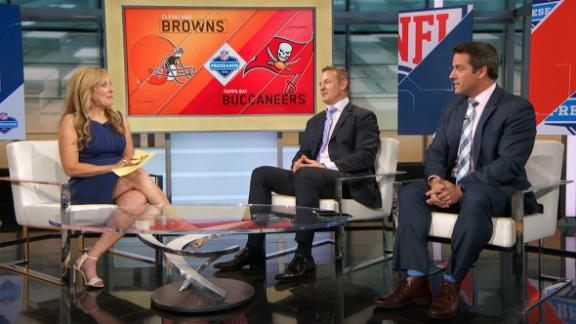 TAMPA, Fla. -- After a particularly rough two weeks for Roberto Aguayo -- including missing three kicks in the first two preseason games -- the Tampa Bay Buccaneers rookie kicker was a perfect 6-for-6, nailing three field goals and three extra points in the Bucs' 30-13 preseason win over the Cleveland Brownson Friday.

His first attempt, a 49-yarder, came just two minutes and 20 seconds into the game, and he drilled it, right down the middle. Raymond James Stadium erupted. His teammates rushed to greet him and celebrate.

"I was excited," Aguayo said after the game. "I was just ready to go for that first one, that long one. ... I hit it smooth right down the middle." He admitted to feeling relaxed before the game, even with the way things have gone for him lately. In addition to the three misses in preseason games, he only mustered 3 of 6 field goals during Tuesday's practice.

"Building up to the game, just going out there, being comfortable, doing what I do pregame -- I was comfortable, [I was] drilling them," Aguayo said. "I've done this my whole life. I just sit back and think. ... my college career didn't happen on accident."

He was a perfect 198 for 198 on extra points at Florida State and was 69 of 78 on field goal attempts, making him the most accurate kicker on college football history.

He was a First-Team All-American all three years before declaring early for the 2016 NFL Draft, where the Bucs traded into the second round to select Aguayo at No. 59, making him the highest-drafter kicker since Mike Nugent in 2005.

At the time, the selection was greeted with skepticism, criticism and even harsh criticism, with many critics believing No. 59 was far too high to draft a kicker. That criticism intensified the more Aguayo struggled this preseason.

On Wednesday, while the team conducted its second joint practice against the Browns, Aguayo and the rest of the special teams unit quietly came to the stadium. He kicked about 25 times with the scoreboard on.

Head coach Dirk Koetter said he believes that helped settle him down.

"He's a tough-minded kid," Koetter said. "He was definitely in a little bit of a slump there, there's no question. For three, four, five days...whatever it was, he was in a slump. It was great to see [him bounce back]. That's definitely the guy we drafted."

In addition to his 48-yard field goal, he made kicks from 21 and 27 yards out and made all three of his extra point attempts.

"He's resilient," said wide receiver Mike Evans. "Guys are writing him off already, guys in the media and things like that. But we know why we took him [in the second round of the draft]. Special kicker. He'll be great for us."

It wasn't the first time Aguayo played under the lights and came away victorious at Raymond James Stadium. When he was 12 years old in 2005, he won a Punt, Pass and Kick competition there. Even back then, he had dreams of being like his idol, Martin Gramatica, and playing for the Bucs.

On Friday, he got to experience joy of setting the tone just like Gramatica did for five seasons with the Bucs. His teammates fed off of it.

"You see he made one [kick] and it was a domino effect," said defensive tackle Gerald McCoy. "It just kept going. I told him just to stay the course and keep going."

Aguayo expressed his gratitude for the support he's gotten from his teammates. "This team is a family. These guys got my back," Aguayo said. "That's one thing I noticed since I got here and I've noticed through the preseason -- not just any one person ... it's everyone."

He also said that getting back to having fun was just what he needed. "Sometimes at the professional level or at any level, you sometimes lose track of that ... try to overthink things," he said. "When you overthink it too much, you put more pressure than [you] need on [yourself]. Just go out there and do what [you] do."
Related topics:
sportsespnroberto aguayogerald mccoytampa bay buccaneersnflpatrick murray
Copyright © 2020 ESPN Internet Ventures. All rights reserved.
More Videos
From CNN Newsource affiliates
TOP STORIES