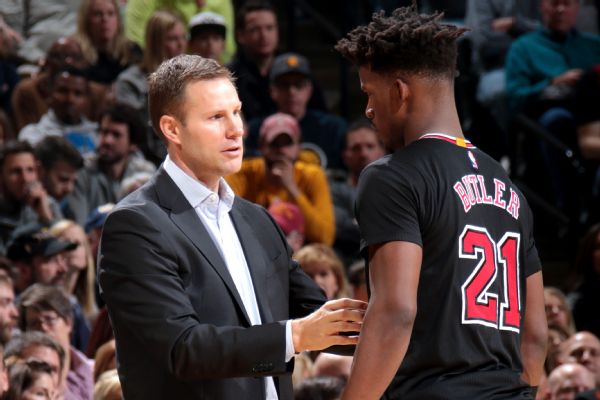 Butler, who has been battling a fever and body aches for several days, scored just one point in Monday's loss to the Oklahoma City Thunder and did not travel with the Bulls in advance of their Tuesday night loss to the Washington Wizards. Mirotic traveled with the Bulls to Washington, D.C., but did not play Tuesday and flew back to Chicago on Wednesday.

"Niko and Jimmy are back in Chicago," Bulls coach Fred Hoiberg said after shootaround Thursday. "Jimmy's starting to feel a little bit better, still not great. Niko is still pretty down and out, so the important thing is to continue to try and get those guys rest, keep them hydrated. Continue on the meds that they're on and hopefully get them back soon."

Hoiberg sounded hopeful that Butler would be in the lineup Saturday against the New Orleans Pelicans.

"I think he was going to try to get in the gym today," Hoiberg said. "Just to go in there and try to move around a little bit, hopefully get a little bit of a sweat. Just try to continue to make progress, and we'll see about Saturday when we get back tomorrow."

Rondo scored 12 points and had six assists in 27 minutes Tuesday. It was the first time he had seen game action since being benched in the second half of a Dec. 30 loss to the Indiana Pacers.

"He will come off the bench tonight," Hoiberg said. "I talked to him about the lift and the spark I thought he gave us with the energy and with the pace and the push that he had with that second unit. Obviously used in the fourth quarter, he made a couple big plays for us and he's ready to go."

Hoiberg acknowledged that Rondo's game fits well with some of the reserves coming off the Bulls' bench.

"That's something obviously that we thought a lot about," Hoiberg said, "is getting him in there with that second group. We get Niko back healthy and obviously with Doug [McDermott] going back to his bench role when we get Jimmy back, to get him out there and be the leader of that second unit."
Related topics:
sportsespnchicago bullsnew york knicksjimmy butlernbanikola miroticrajon rondo
Copyright © 2022 ESPN Internet Ventures. All rights reserved.
TOP STORIES
Philadelphia Phillies outfielder Bryce Harper out indefinitely afte...
Catholic Church leaders praise Supreme Court's ruling
Suspects sought for smash and grabs at 2 Philadelphia Sunoco stations
AccuWeather: Sunny And Hot
Abortion rights supporters fill the streets of cities nationwide
Viewing for Sean Williamson to take place Sunday evening
Brian Laundrie confession letter released: 'I ended her life'
Show More
Pa. Attorney General holds Philly rally to 'protect abortion rights'
Many gather to kick off first weekend of summer down the Jersey Shore
Norway terror alert raised after deadly mass shooting
Officials: Jet ski crash leaves woman injured along Delaware River
Crime Fighters: Who killed Joshua Butts?
More TOP STORIES News