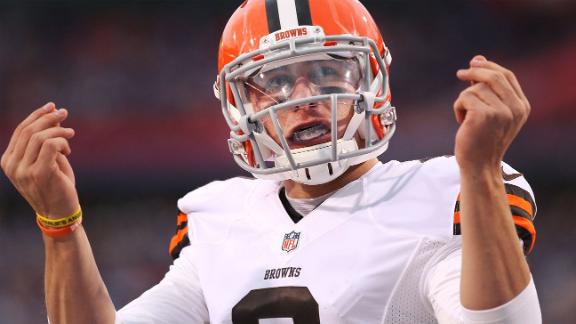 BEREA, Ohio -- Johnny Manziel does not hide from the hype he brings to the NFL.

Now as he makes his first start for the Cleveland Browns on Sunday against the Cincinnati Bengals, his coach says he has to deal with it.

"I guarantee that anyone who sacks him will stand over him and give the money sign," coach Mike Pettine said Thursday of Manziel's signature celebratory gesture.

Pettine said dealing with that kind of taunting and mocking simply goes with the territory of being "Johnny Football."

"That's the price that he has to pay for who he is and the reputation that he brings with him to the NFL," Pettine said. "He already got a taste of it in the preseason."

That was in Washington, when the Redskins taunted Manziel to the point that he gave an obscene gesture -- caught on national TV cameras -- to the Washington bench.

This past week, Bengals coach Marvin Lewis made a dismissive comment about Manziel's height (listed as 6-feet). Lewis apologized for using the word "midget," but it certainly showed his attitude toward Manziel.

"I'm not going to sprout 5 inches over the course of the week so it is what it is," he said.

But the actions of the Redskins and Lewis' words would seem to indicate that teams are eager to take their chances -- and their shots -- on Manziel.

Pettine did not disagree.

"Everybody's gunning for him," Pettine said, adding he would reiterate to Manziel before Sunday that he can't let it get to him the way it did in Washington."That's not anything new coming into the NFL for him. He's been a target probably from the first day he stepped under center in college."

The best way to deal with it is "not to get caught up in it," Pettine said. "When a play is over, it's over. You have to move on to the next one."

Offensive coordinator Kyle Shanahan, for his part, said the Browns want to take pains to ignore detractors and let Manziel just be himself.

"The last thing I want to do is take away from who he is. Once that game stats and the ball snaps, we've coached him since we got him, he's worked since he's been there," said Shanahan, who expects to take full advantage of Manziel's speed and skillset.

"I'm sure it's going to happen pretty fast, you call a pass play and he'll do six spins, reverse it back and forth outside the pocket, and I'll hold my breath and be yelling half the time and then I'll probably be running and jumping on top of him excited at the end of it. Who knows what will happen. That's why everybody's enjoys watching him. I'm excited to see what he does."

Bengals defensive end Wallace Gilberry said Thursday that he and his teammates are focused on stopping Manziel and not "Johnny Football."

"That's just who he is. The kid has a personality," Gilberry said. "And that has nothing to do with football. We understand that. I could care less about how he parties or who he parties with. That's his business.

"Obviously the organization has confidence in him. They made the switch to give him that role. We're not concerned about how his lifestyle's like. All we're concerned about is what he does on the field."

ESPN.com's Coley Harvey and Jeremy Fowler contributed to this report.

Expectations For Manziel In Must-Win Game
Tedy Bruschi and Mark Brunell discuss the Browns' decision to start rookie Johnny Manziel against the Bengals on Sunday and if Manziel can spark Cleveland's offense.

Too Late For Manziel To Make A Difference?
The "SportsNation" crew discussed the Cleveland Brown's decision to start Johnny Manziel and whether the change is too little, too late.