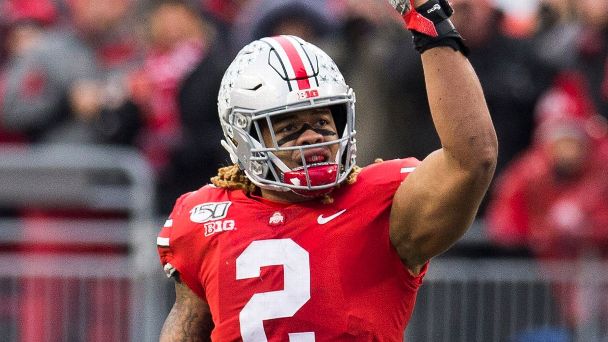 We're down to four teams for the 2019 college football national championship, as the College Football Playoff is set to begin later this month. But who were the best players this season?

Let's take a look as we unveil our annual ESPN All-America team. Nine of the players are in the playoff, with Ohio State and LSU leading the way with three selections each. There's not much suspense at quarterback, but what a thankless task to narrow it down at some of the other positions, namely picking just two running backs and three linebackers. Several of these players were on our preseason and midseason All-America teams, but this is the one that counts.

What a whirlwind for Burrow, who has gone from transferring from Ohio State to being a solid player last season at LSU to being a runaway winner this season for the Heisman Trophy. His numbers are staggering. He passed for 4,715 yards and 48 touchdowns with only six interceptions while completing 77.9% of his passes. And, for the record, it's now Joe Burreaux on the Bayou.

The Canadian running back showed this season he's a lot more than just a track star playing football. The 6-foot-1, 207-pound redshirt sophomore was the FBS leader in rushing yards (1,936), rushing yards per game (161.3), 200-yard rushing games (four) and all-purpose yards per game (180.1). Hubbard led all FBS running backs with seven plays of 50 yards or longer from scrimmage and scored 21 touchdowns.

Taylor solidified a historic career with his third consecutive 1,900-yard rushing season while scoring a career-high 21 touchdowns on the ground. Taylor became just the seventh player in NCAA history to eclipse 6,000 career rushing yards, and he continued to build on his FBS record for most rushing yards through the first three seasons in college.

LSU's remarkable transformation on offense wasn't all just about Burrow, who spread the ball around to a talented crop of receivers. Chase, a 6-1, 200-pound sophomore, has been simply spectacular, with 1,498 receiving yards and 18 touchdown catches in taking home the Biletnikoff Award as the top receiver in college football.

The Sooners have produced a wealth of dynamic skill players over the years, and Lamb has been as explosive as any of them. The 6-2, 189-pound junior ranks seventh nationally in yards per catch (20.83) and is the only player in the top 10 to catch more than 55 passes (58). Lamb is tied for first nationally with five catches of 60 yards or longer and enters the College Football Playoff with 14 touchdown receptions.

In high school, Bryant also played offensive tackle and defensive end, but he leaves FAU as the Mackey Award winner as the nation's top tight end. The 6-5, 240-pound senior leads all FBS tight ends in receptions (65) and yards (1,004) and is tied for the national lead among tight ends in touchdown catches (7). Bryant is the first non-Power 5/Notre Dame player to win the Mackey Award.

Only a sophomore, the 6-6, 326-pound Sewell looks exactly like you want your left tackle to look, and he plays like a grizzled NFL veteran. Sewell was one of the top players, period, this season in the Pac-12 and a force on an extremely talented Oregon offensive line. He's as skilled protecting the passer as he is mauling defenders in the running game and won the Outland Trophy as the nation's top interior lineman.

After making just two starts last season, the 6-4, 313-pound redshirt sophomore emerged as one of the top interior offensive linemen in college football and one of the most improved players in the country. Davis' strength and power are on display every snap, and he repeatedly got the better of some of the top interior defensive linemen in the Big Ten. He didn't allow a sack from his right guard spot.


What would an All-America offensive line look like without a Wisconsin lineman? Biadasz, a 6-3, 320-pound redshirt junior, has been the anchor of that Badgers offensive line and helped to clear the way for Taylor to romp for 1,909 yards this season. Biadasz has the versatility to potentially move to guard in the NFL and is also an outstanding pass-protector.

When you're as balanced as Clemson has been this season on offense, that means a lot of people are getting it done up front on the offensive line. Simpson, a 6-4, 330-pound senior, has been the best of the bunch and was one of the six semifinalists for the Outland Trophy. He's a mauler in the run game and cleared the way for Travis Etienne to rush for 1,500 yards and 17 touchdowns this season.

The 6-5, 320-pound junior has been a staple on the Bulldogs' offensive line from the day he walked onto campus, the first season at right tackle and the past two at left tackle. Thomas faced one top pass-rusher after another this season in the SEC and is a big reason why Georgia enters its bowl game tied for fourth nationally in sacks allowed (12 in 13 games).

After starting the season as a receiver/kick returner, Bowden moved over to quarterback because of injuries at that position. The 6-1, 199-pound junior was the only FBS player to lead his team in both rushing (1,235 yards and 11 touchdowns) and receiving (30 catches for 348 yards and a touchdown). In the regular-season finale, Bowden shredded rival Louisville for 284 rushing yards, breaking the SEC single-game record for rushing yards by a quarterback.

The most dominant and most feared defender in college football this season, Young ransacked opposing offensive lines on his way to being a Heisman Trophy finalist. Despite having to sit out two games because of a suspension, he still racked up 16.5 sacks to lead the country. He also forced six fumbles and was every opposing offensive coordinator's worst nightmare on every play.

With the athleticism of an edge defender, the 6-5, 318-pound Brown dominated from his inside spot at tackle. When he wasn't blowing up double-teams to get to ball carriers, he was collapsing the pocket and putting pressure on quarterbacks. Brown's 12.5 tackles for loss tied for the team lead, and his presence in the middle of one of the most talented defensive lines in college football made everybody around him better.

Lining up as an end in Baylor's base 3-3-5 defense, Lynch also played some inside and was the centerpiece of a Bears unit that made massive strides and ranked in the top 20 nationally in scoring defense. The 6-4, 295-pound junior gave Big 12 offenses fits with his blend of power and athleticism. He collected 12.5 sacks, broke up five passes and forced three fumbles.

For the third consecutive season, Anae led Utah in sacks (12.5), and his 29.5 career sacks rank fourth among active FBS players. The 6-3, 265-pound senior was one of the Pac-12's most dynamic edge disruptors and a driving force on a Utes squad that ranked third nationally in total defense and tied for fifth nationally in scoring defense.

Simmons'versatility is what sets him apart. The 6-4, 230-pound redshirt junior started his career at safety. He's as comfortable in coverage as he is rushing the passer, and his instincts make him a big play waiting to happen on defense. Simmons, Clemson's first Butkus Award winner as the nation's top linebacker, has 14 tackles for loss, 14 quarterback pressures and two interceptions.

The 6-3, 235-pound senior has been a tackling machine for the Bears from his inside linebacker position. He leads the country with 173 total tackles, including 10 for loss, and was voted by the coaches this season as the Pac-12 Defensive Player of the Year. Weaver needs 20 tackles in the bowl game to eclipse the NCAA single-season record of 193 set in 14 games by Texas Tech's Lawrence Flugence in 2002.

Hard-hitting linebackers and Penn State have been synonymous over the years. Parsons, a 6-3, 245-pound sophomore, is one of the surest tacklers in college football and one of those defenders who's an impact player on all three downs. He led the Nittany Lions this season with 95 total tackles, including 11 for loss, and also forced two fumbles.

Okudah has the length, ball skills and speed all coaches covet in a cornerback, and he has been one of the catalysts for an Ohio State defense that improved dramatically from 2018 and ranks third nationally in scoring defense. The 6-1, 200-pound Okudah has three interceptions and two forced fumbles, and opposing offenses rarely test him.

The bloodlines are strong for Winfield, whose father won the Thorpe Award at Ohio State in 1998 as the top defensive back in college football and was a first-round NFL draft pick. The younger Winfield is following in those footsteps. A redshirt sophomore, Winfield bounced back from injuries the past two years to lead the Golden Gophers in tackles (83) and interceptions (seven). He had two picks in the victory over Penn State.

The Crimson Tide might not have been as dominant in the front seven as in recent years, but their secondary was excellent in 2019. McKinney, a 6-1, 200-pound junior, set the tone with a team-leading 85 total tackles. He also intercepted three passes and forced four fumbles. Nick Saban has coached his share of elite safeties at Alabama, and McKinney certainly belongs in that group.

The debate will continue to rage about which school really is "DBU," but in his freshman season, Stingley was as good as (and maybe even better than) LSU hoped he would be coming out of high school as one of the nation's top cornerback prospects. He led the SEC with six interceptions and also broke up 15 passes. Being a true freshman, Stingley was targeted by a lot of opposing quarterbacks, but won a lot more battles than he lost.

The sophomore from Clover, South Carolina, saw his NCAA record of 34 consecutive made field goals snapped this season when he missed a 48-yarder in the regular-season finale against Syracuse. Sciba regrouped to drill a 43-yarder in the final seconds to send that game into overtime and finished 24-of-25 on the season. He tied a school record with five field goals in the 22-20 win over Florida State.

The future is bright in the Little Apple with coach Chris Klieman, and a big reason why is the kind of young players he's bringing into the program in the mold of Youngblood. The freshman receiver, who was a quarterback in high school, returned just 13 kickoffs this season, but three of them went for touchdowns, against Texas, Texas Tech and Iowa State. He became the first freshman to be named the Big 12's Special Teams Player of the Year. 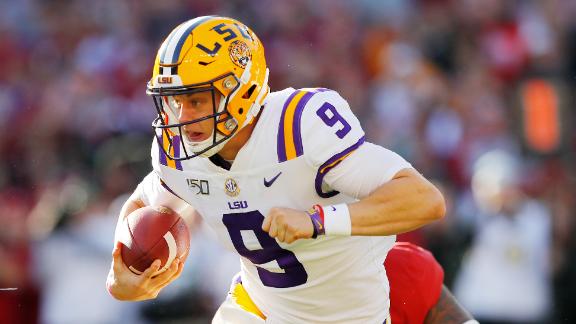