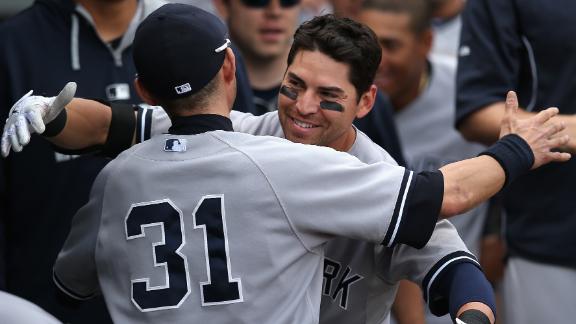 CHICAGO -- Derek Jeter now has played in more games at shortstop than anyone in major league history except for Omar Vizquel.

On Saturday, in his 2,584th game at the position, Jeter passed Luis Aparicio to move into second place on the all-time list. Jeter faced the Chicago White Sox, where Aparicio spent the majority of his career.

"Aparicio, everyone knows how great he is," Jeter said Friday upon tying Aparicio for second all time. "I guess it is ironic that we are here. It is hard to believe when you think about the history of the game. There is only one guy who has played more games.

"It is something I'm proud of. I take pride in doing my job and being available to play every day. You have your name in the company with someone like him, it is pretty special."

If Jeter goes through with his retirement at the end of this season, he will be unable to catch Vizquel, who played 2,709 games at shortstop.

Jeter now has played more games at one position without appearing at another spot than anyone in the history of the game. Vizquel played other infield spots.

"I look at it as being my job to come here and play every day," Jeter said prior to Saturday's game, a 4-3, 10-inning win in which Jeter went 0 for 5 at the plate. "With the exception of last season [when I played 17 games], that's what I've done. I dislocated my shoulder, I missed like six weeks in [2003.] Other than that, I have been pretty fortunate when it comes to injuries.

"I always consider being available to play every day very fortunate. I've always worked hard to make sure I was ready to do that."

Yankees manager Joe Girardi thinks the accomplishment is a testament to both Jeter and the Yankees organization. In 2004, when the Yankees acquired Alex Rodriguez, there was talk about possibly moving Jeter off shortstop, but the team kept its captain in the position.

"I think it is not only a credit to him, it is a credit to the Yankees and that they decided this is our guy," Girardi said. "This guy is going to play here for a long time. They signed him to a long free-agent contract and then signed him to another one. I think you have to give credit to both groups. Derek lived up to the long-term contract, and the Yankees rewarded him."

Yankees Rally To Win In 10
Jacoby Ellsbury's home run in the 10th inning gave the Yankees a 4-3 win over the White Sox.