Draw: Murray, Djokovic in same half 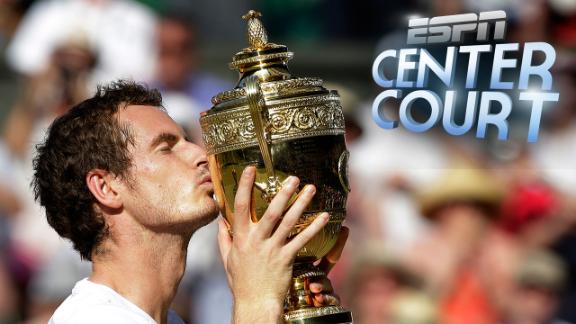 LONDON -- The draw for Wimbledon was relatively kind to defending champion Andy Murray. It was a lot more daunting for top-ranked Rafael Nadal.

Murray, who last year became the first British man to win Wimbledon since Fred Perry in 1936, was drawn Friday to open the defense of his title against 104th-ranked David Goffin of Belgium, who will be playing in the main draw of the grass-court tournament for only the third time.

In the women's draw, top-ranked and five-time champion Serena Williams is in the same quarter as French Open champion Maria Sharapova. The two could face each other in the quarterfinals.

Murray, who is seeded third this year, has admitted he does not know how he will cope with the pressure of walking onto Centre Court as the defending champion on Monday.

At least he has a relatively smooth path in the draw until the quarterfinals, where he could play seventh-seeded David Ferrer or Grigor Dimitrov, who won last week's warm-up at Queen's Club. Then looms a potential semifinal against top-seeded Novak Djokovic -- a rematch of last year's final.

"It will be a proud moment to come back as defending champion," said Murray, who is now coached by former Wimbledon champion Amelie Mauresmo after parting ways with Ivan Lendl earlier this season. "I don't know I will feel, I have no idea. I'm sure I will be nervous and feel some pressure, but I'll try to enjoy it. It's a new experience for me."

For Nadal, it's a lot trickier. The Spaniard, who holds two Wimbledon titles, has not fared well on the grass the past two years, losing in the second round in 2012 and the first round last year.

The top-ranked Nadal, who is seeded No. 2, will start against No. 57 Martin Klizan of Slovakia. The Spaniard, who won his ninth French Open title earlier this month, could then face Lukas Rosol, who beat him here two years ago.

Nadal, the only man with at least one Grand Slam title in 10 consecutive years, could then be pitted against big-serving Ivo Karlovic in the third round. Looming in the quarterfinals could be another big hitter -- eighth-seeded Milos Raonic of Canada.

Friday's draw put Murray in the top half with Djokovic, who won Wimbledon in 2011. Nadal is in the bottom half with seven-time champion Roger Federer.

Federer will start against Paolo Lorenzi of Italy, and Djokovic will play his first match against Andrey Golubev of Kazakhstan.

Djokovic could meet Jo-Wilfried Tsonga in the fourth round and former finalist Tomas Berdych in the last eight.

Federer, who has lost before the quarterfinals at three of the past four Slams, might face third-ranked and Davis Cup teammate Stan Wawrinka in an all-Swiss encounter in the quarters.

Sharapova, who defeated Williams in the 2004 final at age 17 to win her only Wimbledon title and first Grand Slam championship, will open against Samantha Murray. Williams will take on Anna Tatishvili.

If Williams and Sharapova get to the quarterfinals, it will set up their 19th career meeting. Williams leads 16-2 and has not lost to her Russian rival since the 2004 WTA Championships.

Williams is coming off a second-round loss at the French Open, where Sharapova won her fifth major title. After Williams' previous early exit at the French Open in 2012, when she lost in the first round, she went on to win Wimbledon and the US Open.

Williams could face an intriguing fourth-round match against Eugenie Bouchard, a 20-year-old Canadian who has reached the semifinals of both Grand Slams so far this year. But the 13th-seeded Bouchard faces a challenging first-round opponent in Daniela Hantuchova.

Third-seeded Halep, who achieved a breakthrough performance at the French Open by reaching her first major final, is in the same quarter as former No. 1 Ana Ivanovic.

Center Court: Murray Back In Form?
Prim Siripipat and Greg Garber break down whether Andy Murray is completely recovered from back surgery and can successfully defend his Wimbledon title.

Center Court: Men To Watch At Wimby
Prim Siripipat and Greg Garber break down the men to watch at Wimbledon, including Novak Djokovic, Jerzy Janowicz and possibly John Isner.

Center Court: Federer's Best Chance?
Prim Siripipat and Greg Garber discuss whether Roger Federer will win another major and if it will happen at Wimbledon this year.