Dustin Pedroia (hand) out of lineup 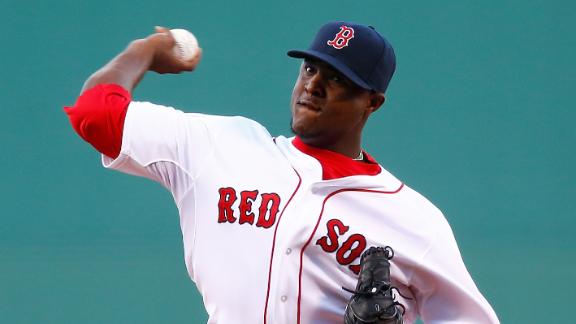 BOSTON -- Red Sox second baseman Dustin Pedroia was not in the starting lineup for Saturday night's 7-1 win over the Rays after being forced from Friday night's win with an injury to his right hand.

Farrell did not rule out Pedroia being available Saturday night.

"We'll have a better read once we the get the results of the MRI back," Farrell said before the game. "Hopefully, this is just a day-to-day situation."

Also Saturday, the Red Sox called up right-hander Rubby De La Rosa from Triple-A Pawtucket, and he started against the Rays, pitching seven scoreless innings, allowing four hits and striking out eight without issuing a walk.

Outfielder Daniel Nava was optioned back to Pawtucket in a corresponding move. Nava has hit at a .130 clip in 22 games for the Red Sox this season. While with the PawSox, he hit .253 with three home runs and 14 RBIs.