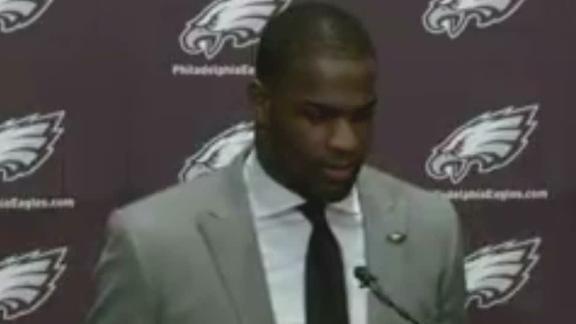 PHILADELPHIA -- DeMarco Murray heard about Dallas Cowboys fans burning their No. 29 jerseys after they learned he had signed with the NFC East rival Philadelphia Eagles.

Murray's leaving hurt. His reason for leaving might hurt a bit more.

"I felt that this was a great opportunity for me to win a Super Bowl, at the end of the day," Murray said Thursday after signing a five-year, $42 million contract with the Eagles. "It wasn't about financial security or anything like that. Obviously, you want something that you deserve, something that is respectful. Those two things are important to me, and I was able to accomplish that. I think the Eagles have a great chance to win a Super Bowl."

Murray said that other teams offered more money. He didn't identify them but said the combination of a fair-market contract and a chance to win made the Eagles the right choice for him.

Cowboys owner Jerry Jones expressed gratitude to Murray, putting the onus on the "allocation of dollars within the management of the salary cap."

"We are very grateful to DeMarco Murray for his contributions to the Dallas Cowboys," Jones said in a statement. "He is a quality person, a very good football player, and a player that we wanted to keep. We have great appreciation for his skills, and if there was no salary cap in place, DeMarco would be a Cowboy."

Eagles coach Chip Kelly said the team originally thought that Murray, the NFL's leading rusher in 2014, would be out of the team's price range. The Eagles tried to sign former San Francisco 49ers running back Frank Gore. After initially agreeing to terms with the Eagles, though, Gore decided to sign with the Indianapolis Colts.

After Gore told the Eagles he was joining the Colts, Kelly placed a call to Murray.

"I got a chance to reach out to him and spent a little time talking to him," Kelly said. "He kind of shared his vision of what he wants and what he's looking for. I know he was offered more money in other places, but he decided he really wanted to be a part of what we were doing here."

Sources told ESPN's Adam Schefter and Chris Mortensen that the $42 million deal with the Eagles includes $21 million guaranteed. And of the $21 million, $18 million is fully guaranteed for skill and injury. In addition, he almost assuredly will receive the final $3 million in guarantees in 2017, if he is on the roster at the end of the 2016 season.

On Friday morning, Murray tweeted appreciation to his new city.

Murray told teams this week he was seeking $8 million to $10 million annually with $20 million to $25 million guaranteed, according to someone directly involved with one of the running back's suitors. Ultimately, a source told ESPN's Ed Werder, the Eagles' final offer was "considerably ahead of the Cowboys' on all fronts" -- including guaranteed money, average salary and the relative ease of earning incentive clauses.

"At the end of the day, this is about finding the best way to collectively fit all of the individual pieces together, in terms of talent, offensive players, defensive players and dollars -- under the salary-cap structure -- that gives you the best chance to have a championship team."

The Eagles were looking for two running backs to replace LeSean McCoy. They traded their all-time leading rusher to the Buffalo Bills last week.

"We faced him twice [a year]," Kelly said of Murray. "You get a chance to see him up close and personal, what he can do -- a physical, downhill runner. In our zone scheme, we're looking for a downhill, one-cut runner."

"When you have a physical, downhill runner," Kelly said, "you'd better have two of them, because they're going to take a lot of physical shots. We want to be able to spread out the carries. We were real fortunate, and it's a credit to LeSean for the last two years; we had our fingers crossed that he wouldn't get injured. Knowing the style that those guys have, distributing the carries with two guys is what we're looking to do."

"Whatever they ask me to do, I'm all for it," Murray said. "As long as we're winning, I'm not much of a stats guy. Obviously, I want to be out on the field as much as I can. I'm not a selfish guy."

Murray said part of the appeal in Philadelphia was the presence of quarterback Sam Bradford, his former teammate and roommate at Oklahoma. The Eagles acquired Bradford in a trade Tuesday. Bradford called and texted Murray, lobbying him to come to Philadelphia.

"Sam's a great friend of mine," Murray said. "He's like a brother to me, as well. We played a lot of great games in Norman. It was a huge influence when I heard he was being traded here. He texted me. He told me to jump on board and let's go win it. I'm excited to get back with him. I'm excited to play with him again."

Murray sounded sorry about the teammates he will not play with again.

"Obviously, Dallas, they have a special place in my heart," Murray said. "I had an incredible four years there, as a person, a husband, a father and a football player. I can't thank the Joneses enough for taking a chance on me coming out of Oklahoma. Coach [Jason] Garrett -- an unbelievable guy, an unbelievable person. The things he taught me over the last four years, I'm going to continue them.

"It just happened, so you have to process everything," Romo said. "All the way up until today, I was still thinking we'd be able to keep DeMarco. Obviously, it's not an ideal situation. I'm losing a close friend, too, so that hurts. We have to trust in the process and the people making the decisions. We have salary-cap implications and a bunch of other things that we have to decide. That plays a role. The Eagles obviously thought as highly of him as we did."

The Eagles saw their Super Bowl odds improve with this latest move in their offseason overhaul. After initially holding steady on the Eagles, the Westgate SuperBook moved the Eagles from 20-1 to 16-1 to win the Super Bowl following the Murray news.

According to ESPN Stats & Information, Murray becomes the NFL's first leading rusher to start the following season on a different team after moving via free agency.

The last NFL leading rusher to switch teams was Bill Dudley, who was traded from the Pittsburgh Steelers to the Detroit Lions in the 1947 offseason.

Information from ESPN's Todd Archer and David Purdum was used in this report. 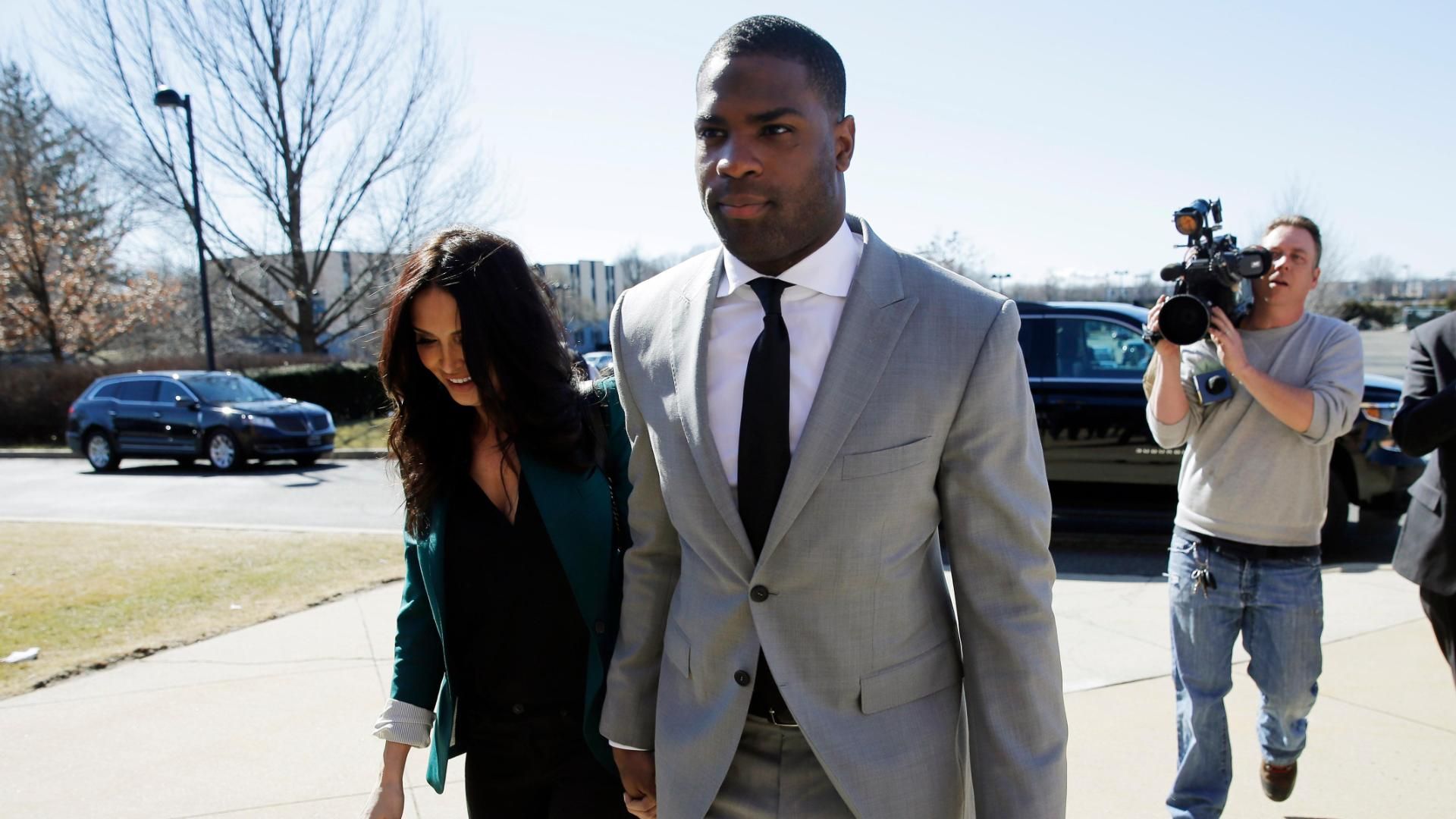 DeMarco Murray's Impact On The Eagles
Adam Schefter discusses the impact RB DeMarco Murray will have on the Eagles and how Chip Kelly will use the Eagles' backfield.

Impact Of The Loss Of Murray On Dallas
ESPN NFL Insider Adam Schefter breaks down what the Cowboys lose with DeMarco Murray's departure and how Chip Kelly will use the Eagles' backfield.