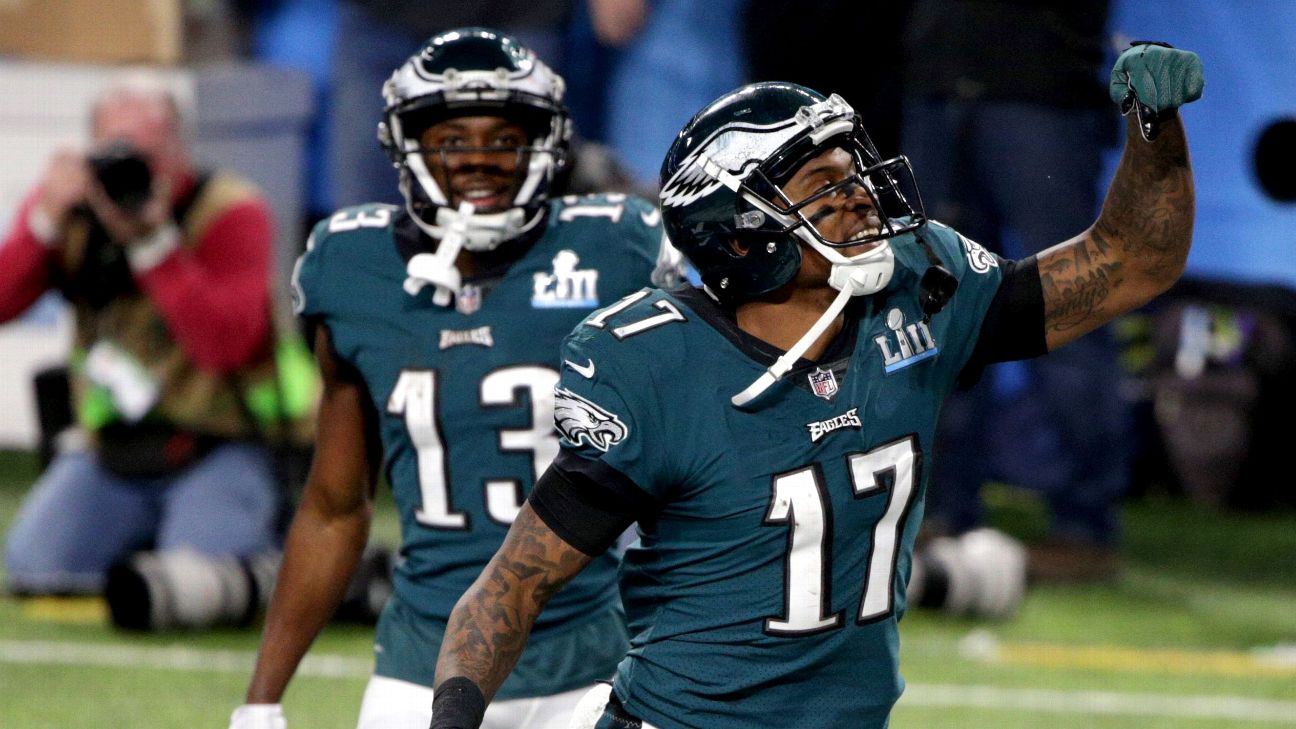 Philadelphia Eagles receiver Alshon Jeffery is expected to miss at least the first two games of the season, but the team will activate him to the 53-man roster this weekend with optimism he could be back by Week 3, according to league and team sources.

Eagles coach Doug Pederson remained noncommittal Tuesday on Jeffery's status for the season opener a week from Thursday against the Atlanta Falcons.

Sources say doctors believe it is in Jeffery's best interest to miss the first two games to maintain the steady gains in rehab from the February shoulder surgery that he underwent following the team's Super Bowl victory over the Patriots.

Jeffery will be allowed to work with the team on the field once he is activated from the preseason physically unable to perform (PUP) list to the 53-man roster on Saturday.

The move will increase his ability to play at full capacity once he is cleared, the sources added.

The Eagles have held their plans close to the vest except to shoot down a report that Jeffery likely would start the season on the PUP list, which would require him to miss at least the first six games of the 2018 season before he would be allowed to practice.

The doctors, trainers and therapists working with Jeffery have advised the Eagles a regular-season PUP designation is unnecessary because of his significant progress.

Jeffery, 28, has gained strength and range of motion in his shoulder. Pederson said he is catching approximately 75 balls per day on the side practice field. The third-year Eagles coach has been mum in his public assessments, despite the internal expectation the receiver will sit out at least the first two games.

"We're just going to continue to monitor him and we'll see where he is at next week and make a decision," Peterson said at his Tuesday presser. "But right now, he's progressing well; we just got to see his day-by-day."

The team signed Jeffery to a four-year, $57 million contract extension in December with knowledge that he played the entire season with the right shoulder injury suffered in the 2017 training camp that would necessitate post-season surgery.

Jeffery's willingness to play through the injury despite signing a one-year contract in 2017 combined with his stellar performance that contributed to the franchise's first Super Bowl championship earned the team's faith that he was worth the investment. The medical team also provided a healthy prognosis.

Jeffery caught 57 passes for 789 yards and nine touchdowns, including a 34-yard scoring catch in the Eagles' Super Bowl win.

A source said it was "was more than worth" it for the Eagles to not have Jeffery for a couple of games to start 2018, considering the extended 2017 season that delayed surgery but paid off handsomely with February's world championship.