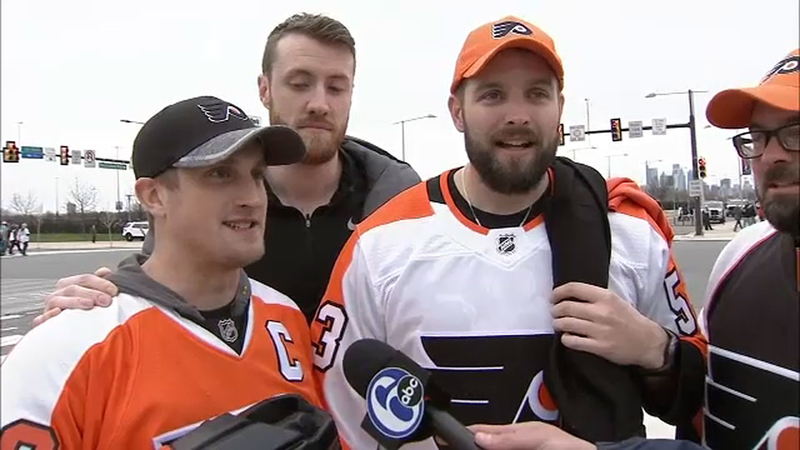 PHILADELPHIA (WPVI) -- Flyers. Sixers. Phillies. There have been many reasons to cheer for Philadelphia sports teams recently and fans are loving every minute of it.

It wasn't just about being a baseball fan Saturday night when the Phillies dominated the Miami Marlins 20-1, it was about being a Philadelphia fan.

Kaliph Hicks of South Philadelphia said, "I think the wins are going to rub off on all the teams. Starting with the Eagles, and going to go all around, bring more championships home."

Sports teams in the Philadelphia region are taking the nation by storm.

The Sixers are heading into the playoffs. And the Flyers are too after their 5-0 victory over the New York Rangers Saturday. The Flyers will meet the Pittsburgh Penguins in the first round.

Thomas Chickadel of South Philadelphia said, "They're going to the playoffs, I'm so excited about it it's been a long time coming."

Michael Hoffner of Bellmawr added, "I think they're going to go all the way."

And even before Saturday's win against the Marlins, an optimistic Phillies crowd poured into Citizens Bank Park.

Mary Jester of Somerton said, "It's definitely going to rub off on them, they're going to do great this year."

Patrick Felix of Fishtown added, "It's truly hard to believe this town has actually hit the winning side of anything, but hey man, grab a rainbow, make a wish, that's what we do."

Grab a rainbow, Philly, and maybe there are more championships on the other side.