Geno: Not sharing wine with McGraw 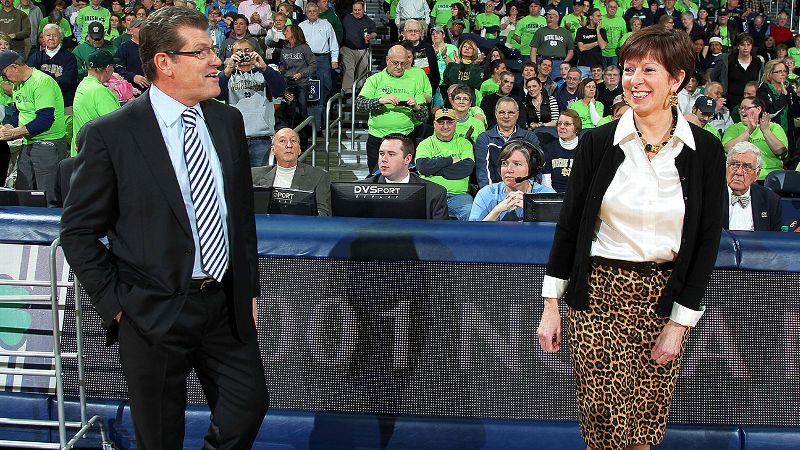 "I think we are past that point," Notre Dame coach Muffet McGraw said of the notion of civility between the rival programs, which will be the first undefeated teams in the history of the women's tournament to meet for the NCAA title (8:30 p.m. ET, Tuesday, ESPN and WatchESPN).

A few minutes later, in the Notre Dame locker room, McGraw elaborated. She said the relationship deteriorated after Notre Dame moved to the Atlantic Coast Conference and Connecticut to the American Athletic Conference.

"I think that got lost," McGraw said. "When we were in the same conference, there was a modicum of it. But I think after beating them and still not feeling any respect for that, we definitely lost something."

When it was his turn at the podium, UConn coach Geno Auriemma responded to McGraw's remarks after some initial prodding by the media. He started by calling it "nonsense."

"I could sit here and list 10,000 coaches that don't interact with each other whose rivalries are intense," Auriemma said. "This is a function of women's basketball.

Asked whether a more civil relationship could be salvaged, McGraw said: "That would be difficult."

"It's a little like how you would feel about a bully," McGraw said of UConn. "I think you have to go in there and attack and not listen to everything that's said."

McGraw said she doesn't think she ever had a close relationship with the outspoken, sometimes bombastic Auriemma.

"There was also some mutual respect when we first started," McGraw said.

McGraw said she thinks Auriemma is looking for a competitive edge.

"I think he likes to get under the skin, but we just didn't want to go there," McGraw said.

McGraw also noted the tension in a crowded room at Bridgewater Arena over the weekend when their teams showed up to support the winners of The Associated Press awards for coach of the year -- McGraw -- and player of the year, Huskies sophomore Breanna Stewart.

"I think there was definite tension in the room," McGraw said. "I think, for us, we wanted Kayla McBride to win the player of the year award. So, I think it was a little bit of that."

Auriemma said Monday he felt Stewart should have won. The Huskies sophomore received 20 of the 36 votes from the national media panel that votes on the weekly Top 25. McBride finished fourth with two votes.

Still, Auriemma stands by his program and his players.

Auriemma went on to say it wasn't uncomfortable for him to be in the room with the Irish.

He also showed the animosity doesn't carry over to opposing players, at least not off the court.

Injured Notre Dame center Natalie Achonwa was one of the last to enter the room for the AP awards ceremony Saturday, looking for a place to sit while trying not to trip over someone with her crutches. Auriemma gave the Irish star his seat.

espnW @ The Championship: Notre Dame-UConn Preview
LaChina Robinson and Carolyn Peck break down what Notre Dame and Connecticut need to do to be the team that cuts down the net in Nashville.