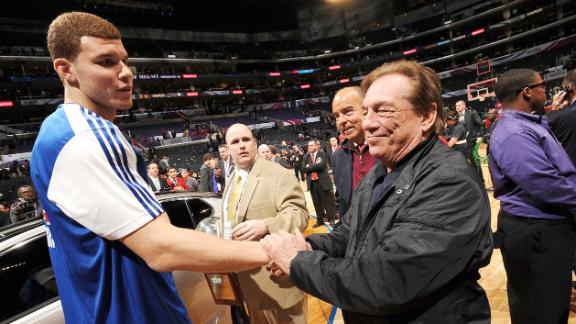 "It's little bit ironic to me that the media has tried to turn Ballmer into a meme when they turned a blind eye to Sterling for years," Griffin wrote. "Steve is a good dude. He's like a cool dad who gives you candy. Donald was like a weird uncle."

When Sterling's racist rants were first released on TMZ in April during the Clippers' playoff series with the Golden State Warriors, Griffin said that he had mixed feelings. He was angered by the audio tapes, which would eventually lead to Sterling's lifetime ban from the NBA, but he wasn't surprised.

"I was conflicted when the tapes came out last season, and suddenly everyone had an opinion on what we as players should be doing to handle it," Griffin wrote. "When I woke up the morning after the tape leaked, I had 40 or 50 text messages. The first thing I did was listen to the tape in bed. It was shocking to actually hear what he said, but not really that surprising to me."

Griffin learned of Sterling's infamous past before the Clippers even drafted him by searching the owner's name online after the Clippers won the lottery and the right to draft Griffin No. 1 in 2009.

"When I knew the Clippers were drafting me, the first thing I did was type Donald Sterling's name into Google," Griffin wrote. "The first hit that came up was 'Donald Sterling is a racist.' I read an article on how he didn't want minorities to live in his apartment buildings. My first thought was, Wow this guy is really, really a racist ... how is he an owner of an NBA team? My second thought was, Wow, these articles are from 2003 and 2008. I guess everybody already knows about this stuff and just doesn't care."

In the article, Griffin also described being invited to Sterling's annual "White Party" as a rookie in spring 2009, and Sterling holding his hand and introducing him to all of his guests. At one point, Griffin writes, two women Sterling hired for the event met him on a balcony and walked him arm-in-arm down the stairs, where Sterling once again grabbed his hand and paraded him around the party.

"Someone asked me the other day if I'm mad that he made out with $2 billion for selling the team," Griffin wrote. "Maybe a little bit. But in the end, I'm just happy he's gone. I think about him pulling me around the White Party in Malibu, and a saying comes to mind: 'Some people are so poor, all they have is their money.'"