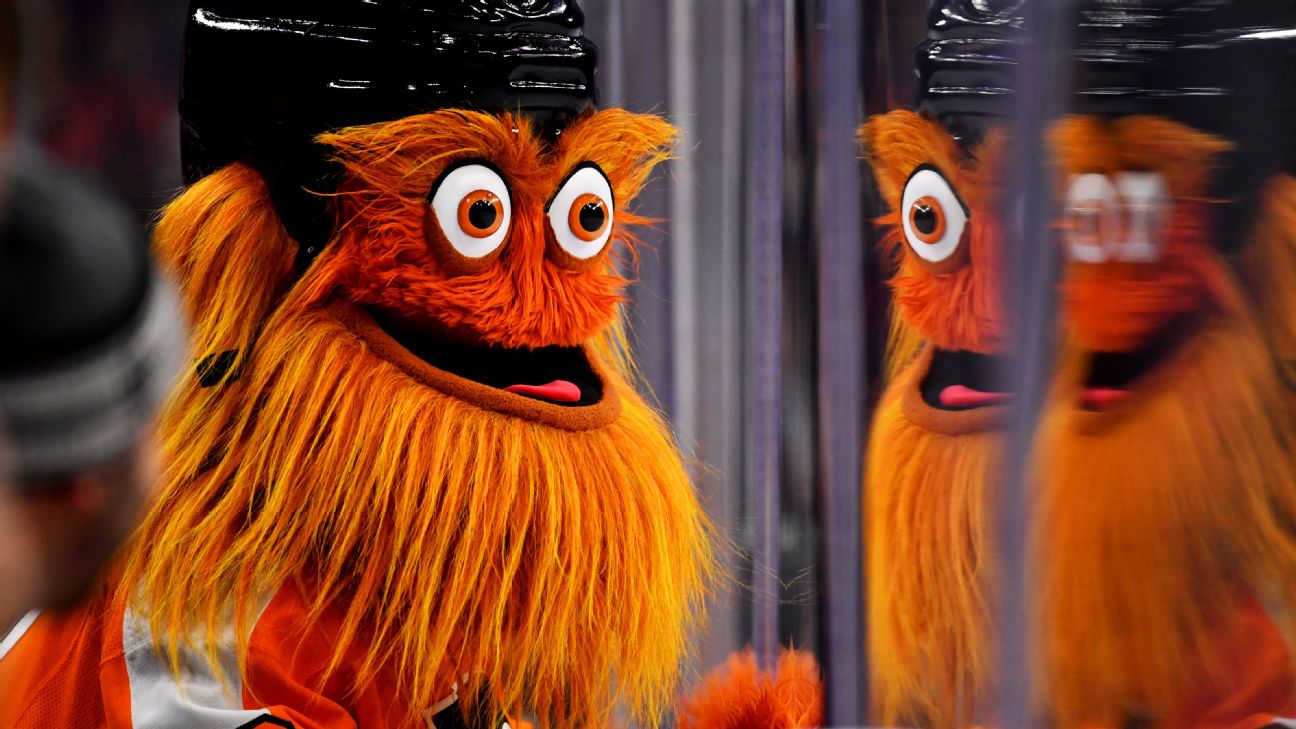 The Philadelphia Flyers will not be going to the Stanley Cup playoffs, and their season ends Monday night. Gritty, the Flyers' mascot, is using the occasion to reflect on the season:

"I got naked (a lot), played in a ball pit, rode a mechanical bull, vacationed in Tahoe, hired (and pretty much immediately fired) my first intern, threw some cake, and danced my lil dancey dance," Gritty said, recapping his year, in a tweet on Thursday.


Gritty also realized how selfish he had been, doing antics only for himself.

"I've been doing ME, whatever I wanted to do," Gritty said. "But I didn't even consider asking.. what do YOU want me to do?"

Enter one persistent Flyers fan. Lauren Lam lives in the Philadelphia area and recently had a dream come true thanks to the power of Twitter and Gritty -- and one should never underestimate the former. And definitely not the latter.

At a Flyers game, Lam saw Gritty throw a sheet cake at a fan for the first time, and decided it had to be her. She first tweeted about said desire in December 2019.


"The Flyers tweeted that they wanted to make some fans' days and I tweeted that I wanted Gritty to throw a sheet cake at me," Lam told ESPN. "I think it was a mixture of the ridiculousness of the request and the fact that I have a lot of Flyers fans for Twitter followers that made for the perfect storm of a ton of engagement -- but not a peep from any Flyers organization social media accounts. Even though it was a bust, it was the most fun day I've ever had on the internet. And from there it took off."

On the internet, she became The Girl Who Wanted Gritty To Throw A Sheet Cake At Her. Any time Gritty threw a sheet cake at someone else, Lam became what she calls "incensed" on the internet -- though she notes was clearly having fun and being lighthearted about it. It was something fun and lighthearted to joke about throughout a rough pandemic year for all.

Finally, after tweets from her and other Flyers faithful, her dream came true on May 6. Gritty tweeted he was going to make some fans' dreams come true yet again, and her notifications were blowing that it was her time to shine.

"The moment to seize the opportunity was upon me," Lam told ESPN.

"About an hour later, I got a DM from the Flyers telling me they couldn't promise what I asked for, but they could promise something. They asked that I keep it a secret," she explained.


What happened next was what Lam calls "so simple and absurd."

"I met with Flyers social media outside of a van in the Wells Fargo parking lot, and out popped Gritty with one of his Secret Service agents, who told me not to flinch and handed Gritty the cake when he was ready," Lam said. "Gritty actually threw two sheet cakes at me, but the final video is so perfect. The little squeak followed immediately, but the smack of cake against my head is like art."

She drove home covered in cake.

Lam said she persisted for so long because it was such an inane request.