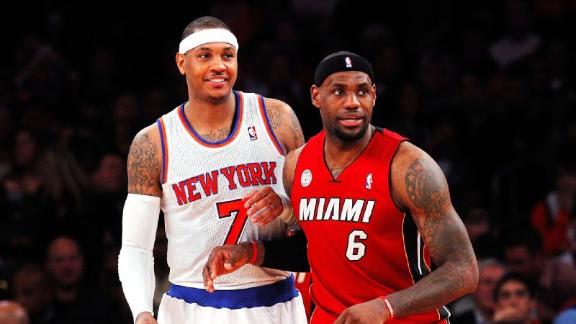 MIAMI -- The Miami Heat's immediate focus remains overcoming a 2-1 NBA Finals deficit to the San Antonio Spurs, but discussions have begun within the organization about trying to grow their so-called Big Three into a Big Four, according to sources close to the situation.

The mere concept would require the star trio of LeBron James, Dwyane Wade and Chris Bosh to all opt out of their current contracts by the end of the month and likely take further salary reductions in new deals that start next season to give Miami the ability to offer Anthony a representative first-year salary. The Heat also are prevented from making any formal contact with Anthony until July 1 and can do so then only if he opts out of the final year of his current contract. Anthony has until June 23 to notify the Knicks of his intentions, according to sources.

But the success of the Heat's 2010 free-agent bonanza has established them as the NBA's undisputed destination franchise, with owner Micky Arison empowering big-thinking team president Pat Riley to attempt to pull off another coup in the market despite new collective bargaining agreement rules aimed at preventing it.

Sources say internal conversations within the Heat organization about pursuing this course have run concurrently with Miami's bid to win a third consecutive championship, with sources adding that James in particular is likely to try to recoup potential salary sacrificed through fresh off-court business opportunities if the Heat's new dream scenario does come to fruition.

James' off-court business is booming, thanks to a string of investments paying off massively and the prospect of new opportunities in endorsements and entertainment projects promising to expand his wealth significantly in coming years.

In a recent example, while James was leading the Heat to a victory over the Indiana Pacers in the Eastern Conference finals, sources say the 29-year-old was finalizing what is believed to be the biggest equity cash payout for a professional athlete in history as part of Apple's recent $3 billion purchase of Beats Electronics. Sources briefed on the situation say James realized a profit of more than $30 million in cash and stock in the Beats sale after he had struck a deal to get a small stake in the company at its inception in 2008 in exchange for promoting its high-end headphones.

With cooperation from their stars and role players Udonis Haslem and Chris Andersen, who also possess player options for next season, the Heat could open up in excess of $50 million in cap space this summer and have the most financial flexibility in the league. The only Heat player locked into place for next season is Norris Cole at a salary of $2 million, although Riley will have to contend with a handful of cap holds for pending free agents as well as their upcoming first-round pick (No. 26 overall) in the draft later this month.

Getting James, Wade, Bosh, Haslem and Andersen to take pay cuts significant enough to open a significant slot for Anthony undoubtedly will be complex. It would require reductions that could stretch into the tens of millions over the next few seasons. Sources say the Heat's plan is to sell the players they wish to keep on the long-term benefits of making such a sacrifice.

The Heat are in essence trying to emulate some of the longstanding policies employed by their current Finals opponent, as the Spurs have been able to keep Tim Duncan, Tony Parker and Manu Ginobili together for more than a decade -- while routinely strengthening the supporting cast around them -- because their three best players have been repeatedly willing to take pay cuts.

The Spurs' ability to keep the championship window open by selling their mainstays on such sacrifices has allowed Duncan and Spurs coach Gregg Popovich to make it back to the game's biggest stage 15 years after San Antonio's first Finals appearance in 1999.

James will turn 30 in December, and Bosh, Wade and Anthony all are in their 30s and mindful of their advancing age.

Pairing with Anthony, his close friend and a player who sports a similar skill set, is attractive to James. Anthony and the Heat's three stars have maintained a good relationship since they entered the league together in the 2003 draft class. There is a strong belief that the team concept Miami has forged since 2010 would allow them to learn to be effective all playing together.

Bosh already has indicated publicly on multiple occasions during the playoffs that, despite external suggestions that he could be tempted into moving on and restoring himself as a team's No. 1 option like he was in Toronto, he is determined to stay with the Heat into the future.

But James, as he has all season, sidestepped an attempt at Wednesday's off-day news conference to get him talking about his future, saying: "That's kind of like on the back burner right now."

James insisted he's more focused on "figuring out how I'm going to prioritize Tony Parker and Kawhi Leonard and Duncan and Danny Green and Ginobili, Patty Mills and Boris Diaw and Tiago Splitter and the list goes on and on. Matt Bonner, Gregg Popovich and [Spurs assistant] Ime Udoka and those kind of guys. [Free agency] is the last thing I'm thinking about right now."

As ESPN.com reported earlier Wednesday, Anthony must notify the Knicks by June 23 -- essentially one week before the start of free agency -- whether he plans to opt in or out of the final year of his current contract. Sources say Knicks president Phil Jackson continues to urge Anthony to opt into next season's $23.3 million and put off unrestricted free agency for one more year.

Jackson's pitch to Anthony -- which sources say he has delivered more than once over the past month -- is founded upon the notion that the Knicks will have increased financial flexibility in the summer of 2015 to make their own run at James or sign another marquee free agent to pair with a re-signed Anthony.

Should James elect to delay free agency for a year and choose to opt in for the $21 million he's owed by the Heat next season, sources say, he is at the top of the list of free agents the Knicks are telling Anthony they intend to pursue in the summer of 2015.

ESPN's Stephen A. Smith said on his ESPN New York radio show Tuesday and in subsequent interviews that Anthony and James have expressed the mutual desire to play together before their careers end and will look into teaming up if both wind up on the open market in July 2015.

Chicago, Houston and Dallas are teams Anthony will consider starting July 1, sources say, if the 30-year-old does decide to become a free agent this summer. But it's believed the opportunity to join James in Miami would trump all other options, especially after Anthony made it a point earlier this season in an interview for NBA TV to say how "smart" James was to join forces with Wade and Bosh when he did.

The Heat are the NBA's first team to reach four consecutive NBA Finals since the Boston Celtics from 1984 to 1987 and are trying to become just the fourth franchise in league history -- along with the Celtics, Los Angeles Lakers and Bulls -- to complete a three-peat.

James, Wade and Bosh all have until the end of June, sources say, to notify the Heat whether they intend to opt into their respective final years of their current contracts or become free agents this July 1.

Heat Looking To Target Carmelo
ESPN's Brian Windhorst breaks down the Heat's interest in Carmelo Anthony and how the outcome of the NBA Finals will impact their decision.