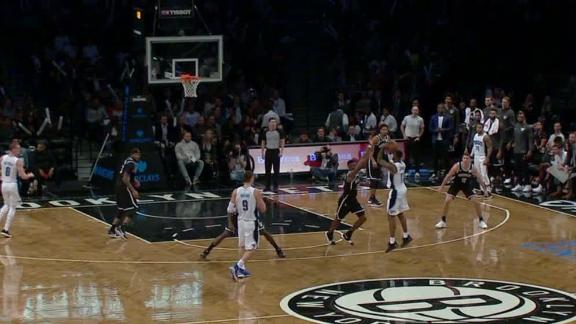 Philadelphia - Ben Simmons made the Philadelphia 76ers record books, but unfortunately for him and his young teammates, they also came away with their second loss of the new season.

Simmons became the first Sixers player - and just the 11th in NBA history - to begin his career with two double-doubles as he ended the team's 102-92 loss with 11 points and 11 rebounds. He also had five assists.

"I took what they gave me, it wasn't enough obviously," Simmons said post-game. "That's just the way I play."

Following an impressive debut in Washington, Simmons followed up with a solid showing against Boston.

Philadelphia coach Brett Brown had praised Simmons' game on Wednesday while wondering if perhaps the Australian could have finished at the rim more. On Friday, Simmons shot just 4-11 from the field, and Brown said the team would continue to work with Simmons on his finishing skills around the basket.

"I think this is part of Ben's evolution going forward," Brown said. "He really does do an amazing job of getting to the rim - because he can get close to the rim. So, is it one more dribble? Is it more coming to jump stops? Is it more up-and-under and going through people and looking for and-ones?

"The good news is that he's got a skill that gets him there, and now we gotta help develop him to finish once he gets there."

Despite not starring against the Celtics, Simmons' showing still earned the praise of Boston's All-Star Al Horford.

"Simmons is going to be a problem," Horford said after the game. "He's very poised. He is like my size - it feels like maybe even bigger - and his ability to get up-and-down the floor, it's impressive."

Philadelphia have shown flashes of what their core could look like once they get some more experience; at times they've looked like the most compelling team in the league, other times they look like the 76ers of 'The Process' years.

On Wednesday, Simmons talked about the potential of the team, feeling confident the true makeup of this squad will emerge as their journey continues. After two losses to begin their campaign, does he still feel that way?

"Definitely," he said. "I think we're getting there. Everyone's starting to gel and we'll figure it out."

The good news for the Sixers is there's another opportunity for them to figure it out tomorrow night when they travel to Toronto. After being outscored by the Celtics 56-42 in the second half, Simmons said the focus would be on maintaining their intensity for a full 48 minutes.

"It's a learning experience for us," he said. "We've got a lot of young guys but we gotta capitalise - especially in the third quarter after halftime when we come out."

Brown agreed the game started slipping in the third term.

"We were up seven in the third period and you felt like with a few more baskets that they [Celtics] might have gone away," he said.

The Sixers still led by five early in the last quarter, but the Celtics took control as the period wore on. For the second game in a row, turnovers cost the Sixers in the end, and even though Boston didn't score any fast break points for the game, it will force coach Brown to analyse his team's half-court defense.

"We will look at that," Brown said. "The 102 points you'd take against that team - it's unusual that it came in the half-court. I think we're trying to place too much with our hands. I think we ended up fouling too much.

"I give the Celtics credit, but I feel like we let one slip."

Simmons drains buzzer-beater to end third
After Trevor Booker scores on a tip-in for the Nets, Jonathan Simmons shoots a deep 3-pointer to give the Magic a lead after three quarters.