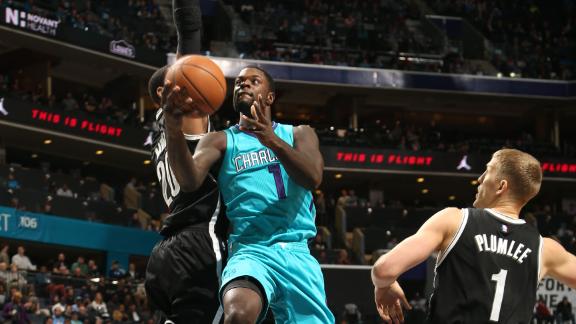 The Brooklyn Nets, Charlotte Hornets and Oklahoma City Thunder are involved in discussions about a three-way trade that would send Brooklyn playground legend Lance Stephenson to his hometown team, according to league sources.

Stephenson, a poor fit since signing in Charlotte this past summer, would join the Nets, while Brooklyn center Brook Lopez would be moved to Oklahoma City, sources said. Charlotte would receive Jarrett Jack from Brooklyn and Jeremy Lamb and Grant Jerrett from Oklahoma City.

Other pieces might be included to make the deal work financially.

Sources confirmed a USA Today report that Oklahoma City center Kendrick Perkins could go to the Nets in a potential deal. In earlier trade discussions, the Nets and Thunder had talked about a potential deal involving Lopez and Perkins, among other players, according to sources.

The Hornets, who have been trying to move Stephenson for more than a month, want to make the deal, and Oklahoma City has agreed as well, leaving the Nets as the only holdout, according to sources.

Brooklyn also has had trade talks with the Miami Heat about Lopez, sources said.

The Nets made it known to other teams in early December that Lopez, point guard Deron Williams and swingman Joe Johnson were available via trade, and they recently had talks with the Sacramento Kings about Williams, according to sources.

The Nets (16-23) have lost seven straight games, and general manager Billy King has been active in looking to shake things up.

Lopez, 26, is averaging 14.6 points and 6.3 rebounds per game with 50.4 percent shooting. He has been coming off the bench recently. He will make $15.7 million this season and has a $16.7 million player option for 2015-16. Lopez, the longest-tenured member of the Nets, has a history of foot injuries.

Stephenson, 24, returned to Charlotte's lineup Wednesday after missing 14 straight games due to a pelvic strain. He signed a three-year, $27 million contract with the Hornets in the offseason but is shooting just 38.6 percent from the field.

Stephenson starred at Lincoln High School in Brooklyn. He has had a history of off-court trouble and has been criticized for some of his on-court attics, which included blowing in LeBron James' ear during last season's Eastern Conference finals.