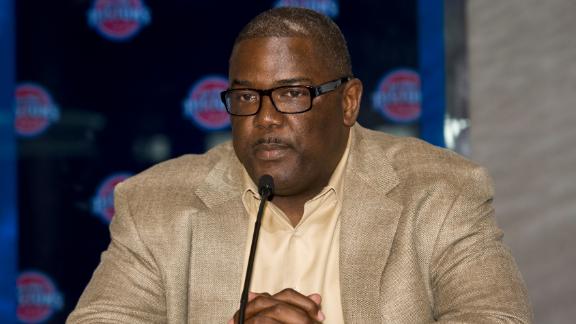 Pistons president Joe Dumars is expected to resign before his contract expires on July 1, league executives have told ESPN.com.

The Pistons signed high-priced free agents Josh Smith and Brandon Jennings in the offseason but have staggered to a disappointing 28-49 record that has them out of playoff contention.

The Detroit News reported earlier Tuesday that Dumars was planning to resign, possibly as early as this week.

Dumars has spent 29 years with the franchise, as both a player and an executive, and has had a hand in every Detroit title. Drafted in 1985, he retired as a player in 1999 and took over as Pistons president in 2000. His changes led to a title in 2004, followed by another Finals appearance the next season.

Information from ESPN The Magazine's Chris Broussard was used in this report.

Dumars Soon To Be Done In Detroit
Amin Elhassan discusses why it's been a long time coming for Pistons president Joe Dumars to part ways with the organization, as it is expected he will do, according to league sources.

Dumars Reportedly Will Resign
Mike Golic and Mike Greenberg react to the report that Joe Dumars plans to resign as Pistons president of basketball operations.