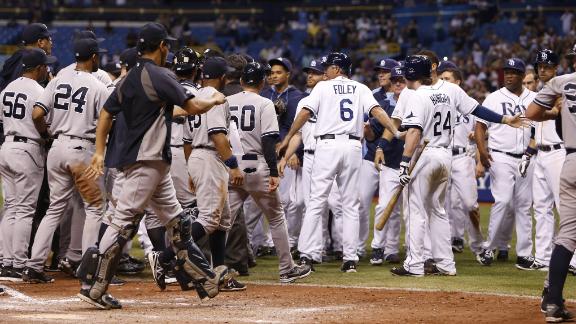 What made Girardi ultimately erupt was when Derek Jeter was hit by inexperienced reliever Steven Geltz in the eighth inning.

It marked the fifth time a Yankee had been hit by a Ray in the past four games, while the Yankees have not hit any Rays. Jeter has been hit twice, and Chase Headley ended up in the hospital after being hit on the chin.

Girardi initially said he left the dugout in the eighth because plate umpire Rob Drake warned both benches, an inexplicable decision in Girardi's opinion. While on the field, Girardi started yelling at Geltz and was ejected.

Protecting a five-run lead, Geltz faced Jeter in the midst of an 0-for-26 slump. Geltz was up 0-2 in the count when the 95 mph fastball got away.

Rays manager Joe Maddon ceded Girardi some points but said there would be no contrition.

"I agree with everything he said, but to pitch inside correctly or incorrectly, that's not the point," Maddon said. "It is called baseball; sometimes hitters get hit. But I understand their frustration entirely. We are not going to apologize for it because it is part of the game. But I do get why he was upset."

Maddon added that on the pitch that hit Jeter, Geltz intended it to be away.

Headley said that if the Rays can't control where they are throwing the ball, they are not ready to pitch inside at this level.

"You shouldn't be in the big leagues if you keep doing that consistently," Headley said. "I mean, guys are throwing too hard with too good a stuff. Granted, I know that balls get away every now and then. I get it. It can't keep happening. If a guy can't control the fastball, he can't pitch in there. He can't be in the game. He can't be in the big leagues because guys' careers are at stake. You can't have it happen. Again, I don't think there is intent, but that doesn't change what can possibly happen."

Headley missed four games after being hit in the chin by a 96 mph fastball from the Rays' Jake McGeeon Thursday.

After Jeter was hit, both sides were warned, which Girardi had a problem with.

"Who knows why they do things?" Girardi said of the umpires' decisions.

To begin the bottom of the eighth inning, David Phelps threw a pitch very inside to Kevin Kiermaier. Phelps was ejected as both dugouts and bullpens emptied.

"Now, you are playing judge and jury and God and you are talking about intent," Girardi said. "Phelpsie hasn't pitched once in a month, once in six weeks. His command is not going to be very good."

While Francisco Cervelli from the Yankees and Sean Rodriguez from the Rays got pretty animated, no punches were thrown. Bench coach Tony Penaalso was thrown out.

Jeter, who was honored by the Rays before the game, tried to tamp down the emotions.

"I'm sure it's a sensitive subject here, especially considering what happened with Chase the other day," Jeter said. "We had a few guys get hit, so yeah, I'm sure there's a lot of frustration, just like they were frustrated when they almost got hit. Frustration probably on both sides."

Girardi also was heated in part because the umpires, by rule, were unable to review a two-run sacrifice fly in the seventh. Girardi believed James Loney left the bag early when he scored from second.

As for Wednesday, Headley thought there might be some carry-over.