Joel Embiid out at least 2 games 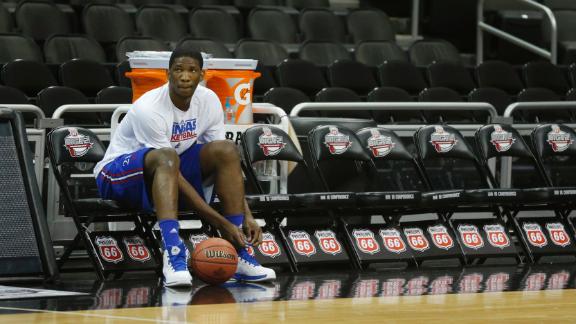 Kansas freshman center Joel Embiid will not play in the opening weekend of the NCAA tournament, Jayhawks coach Bill Self confirmed to the Kansas City Star on Wednesday.

While Self previously told ESPN.com he was confident Embiid would play at some point in the tourney, the 7-foot Cameroon native wasn't expected to be available for the opening weekend because of an ailing back. Embiid also missed the final two regular-season games and the Big 12 tournament.

"He's not going to play," Self told Kansascity.com. "I'm not saying there couldn't be a miraculous act occur, but we're certainly not planning on that or expecting that."

Self also said Embiid has continued to make progress from his injury but has yet to return to practice.

The No. 2 seed in the South, Kansas opens the NCAA tournament Friday against No. 15 Eastern Kentucky. If the Jayhawks advance, they would face New Mexico or Stanford on Sunday.

Embiid recently met with a spinal specialist, and an initial diagnosis of a stress fracture in his back was confirmed. The school has said Embiid's injury won't require surgery.

Should he choose to leave school early, Embiid is considered by many as a leading candidate to go No. 1 in the NBA draft in June. The Big 12 Defensive Player of the Year is averaging 11.2 points, 8.1 rebounds and 2.6 blocks per game.