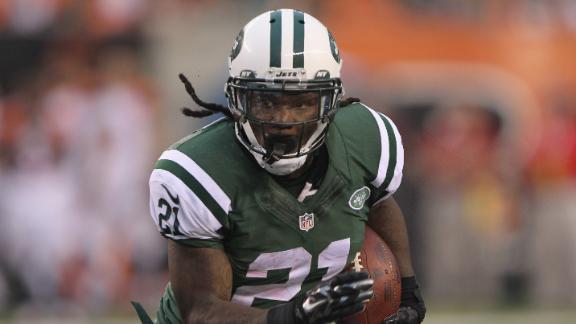 Former Jets and Titans running back Chris Johnson, who was shot in his right shoulder early Sunday in a drive-by shooting that left one person dead, was released Sunday from a hospital in Orlando, Florida.

Johnson, who was admitted to Orlando Regional Medical Center in stable condition with a non-life-threatening injury, is recovering at home from the gunshot wound.

"He thanks everyone for their support surrounding this unfortunate incident as well as their condolences regarding the passing of his good friend," the statement said. "He is expected to make a quick and full recovery and is looking forward to being back out on the field training as soon as possible."

New details emerged from the shooting, which occurred at 4 a.m. ET Sunday. Johnson was in the direct line of fire, based on the incident report released by the Orange County sheriff's department.

Johnson was in the front passenger seat, and deputies observed "numerous bullet holes" on the passenger side of the vehicle. The driver, Dreekius Oricko Johnson, was killed by a gunshot to the right side of the head, according to the report. The car was in the "drive" position.

When police arrived, Chris Johnson and Reggie Johnson, who also suffered non-life-threatening wounds, were standing on a nearby sidewalk. Several shell casings were found in the street by police.

The 29-year-old running back was "uncooperative," according to the report, which said he "would only state that he saw a 'car roll by and they shot.' He could not provide a vehicle description or any other relevant information."

None of the individuals involved in the shooting are related, the sheriff's department said. Detectives believe the Jeep was the intended target but can't say if the occupants were specifically targeted.

No arrests have been made in what police are calling a homicide investigation. The deceased driver had a long criminal history, including 10 arrests and a stint of nearly four years in prison for cocaine possession and aggravated battery with a deadly weapon, according to court records obtained by NJ Advance Media.

Chris Johnson is poised to become a free agent Tuesday. After one season with the Jets, the team declined to exercise an option for 2015, setting him free last month.

This was his second off-the-field incident this offseason. In January, he was arrested in Orlando -- his hometown -- and charged with the open carrying of a firearm, a second-degree misdemeanor.

Johnson is coming off the most frustrating year of his career. He recorded career lows for carries (155), rushing yards (663) and rushing touchdowns (one).

The former Titans star, released by Tennessee in April, signed a two-year, $8 million contract with the Jets. But he never ascended into a starting role, as he split time with Chris Ivory.

With 8,628 yards, Johnson is the fifth-leading active rusher in the NFL. He is one of only seven players to rush for 2,000 yards in a season.