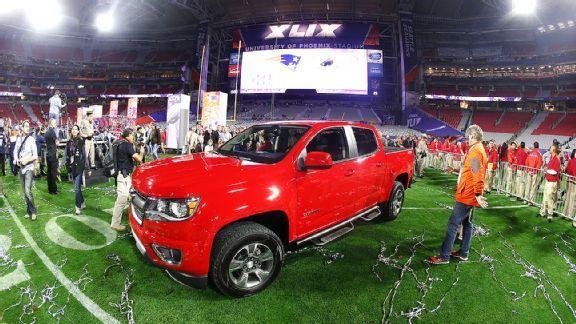 The truck that Chevrolet presented to New England Patriots quarterback Tom Brady as Super Bowl MVP will be given directly by the company to teammate Malcolm Butler instead.

Chevy spokesman Michael Albano said the truck, a loaded Colorado, will be given to the cornerback, who intercepted Russell Wilson's pass on the goal line to seal the Patriots' win in Super Bowl XLIX last Sunday. The event will take place in the Boston area Tuesday, Albano said.

If Brady received the truck himself and gave it to Butler, he would have to count its value -- which Albano said was worth roughly $35,000 -- as income and he would be taxed on it, said Robert Raiola, a CPA who specializes in sports tax management with O'Connor Davies in New Jersey. Brady also might have had to pay a gift tax. U.S. residents can give $5,430,000 worth of gifts in their lifetime before having to pay tax on what they give. It is not known how close Brady might be to that limit.

Now instead of Brady paying income taxes, Butler will have to, according to Raiola. The approximately $35,000 value will now count as income to Butler, and he will pay taxes on that.

Brady has made more than $150 million in his career.

Brady told Boston radio station WEEI on Tuesday that he would love to give the truck to Butler, and the idea was launched.

Brady has given a vehicle away before. He donated the car he won as Super Bowl XXXVIII MVP to his high school, which then raised $365,000 from a raffle associated with it.