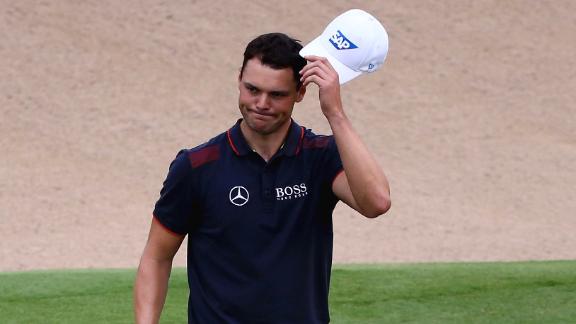 ABU DHABI, United Arab Emirates -- Renowned as one of golf's best front-runners, two-time major winner Martin Kaymer stood on the sixth tee at the Abu Dhabi Championship holding a 10-shot lead in the final round and with records in his sights.

Then came one of the biggest turnarounds the sport has seen.

Within 90 minutes, the normally unflappable Kaymer dropped six shots in eight holes and got swallowed up by Gary Stal as the No. 357-ranked Frenchman mounted an improbable surge to win his first European Tour title Sunday.

"A little shocked, surprised," said Kaymer, his brow furrowed. "I don't know how to put it into words."

The 22-year-old Stal was in a state of shock too after shooting a 7-under 65 for a one-shot victory over top-ranked Rory McIlroy -- one of his idols. Kaymer was a stroke further back in third after a 75.

Stal had teed off at Abu Dhabi Golf Club that morning with a deficit of eight shots to Kaymer and only second place on his mind. Kaymer, a three-time winner of the event, started the final round protecting a six-shot lead, and even McIlroy had said the German was "playing in his own tournament."

Three birdies in his first four holes helped stretch the lead to 10 shots. At 23 under, Kaymer was one stroke off his record under-par score around the National Course.

"When I saw the leaderboard on the fifth hole, I thought it's not possible to win," said Stal, who had an overall 19-under 269.

Kaymer's round started to unravel at No. 6 when he made his first bogey since Thursday -- a run of 47 holes. He then had a double bogey at No. 9 after being forced to take a drop when his drive landed under a bush.

The lead Kaymer had held since the first round was wiped out for good when another drive wound up at the base of a bush on No. 13. A drop gave him a poor lie in the sandy wasteland, and after chipping out into the fairway, he scuffed his approach shot 10 yards short of the green. He two-putted for a triple bogey, and Stal was in front for the first time.

"I do miss fairways, but usually you get away with it OK. You don't make double or triple bogey," Kaymer said. "This is what happened today."

Stal, playing in the group in front of Kaymer, made six birdies from holes 4 to 11 and sank a 25-foot birdie putt on the 16th to move two shots ahead of Kaymer and McIlroy, who stormed into contention with three straight birdies around the turn. Stal's approach to the 18th was tentative and landed in the rough to the right of the green, but he got up and down in two.

Kaymer needed to eagle the final hole to force a playoff, but a drive into a fairway bunker ended his hopes and he made par.

Stal shed tears after being applauded off the 18th green. He said he was thinking about his mother, Christine, who died of cancer last year while he was playing in the BMW PGA Championship at Wentworth.

"I can't believe this," said Stal, whose previous best finish was a tie for fifth at the South African Open seven days earlier.

Kaymer said it was an "interesting day that I need to reflect on," but he tried to take the positives from an otherwise impressive first tournament of 2015.

The same can be said of McIlroy, who shot 66 after hitting every green in regulation Sunday to finish second in Abu Dhabi for the fourth time. His ballstriking was superb all week, but missing a string of putts Saturday -- when he shot 71 -- cost him.

"Just a little too late for me today," McIlroy said. "I feel like I'm hitting the ball very, very well. I didn't putt as well as I'd have liked this week, but all parts of my game feel pretty good."

Stal is likely to move into the top 100 in the rankings Monday after a victory that gives him an exemption on the European Tour until the end of 2017.

Belgium's Thomas Pieters (70) and France's Victor Dubuisson (67) tied for fourth at 16 under.