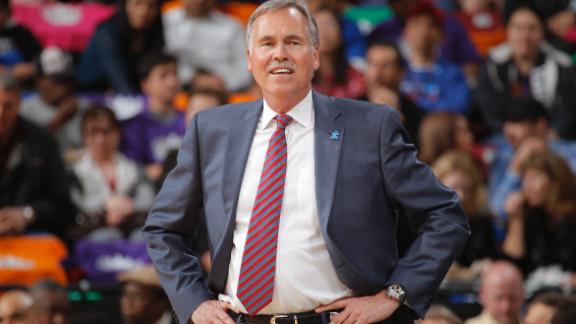 During conversations with the Los Angeles Lakers over the past 10 days, embattled coach Mike D'Antoni has asked them to pick up the team option on the fourth year of his current contract, sources with knowledge of the situation told ESPN.com.

The motivation for D'Antoni's request is rooted in his desire for the authority to coach and ensure he won't enter next season as a lame duck whose job security is undermined by constant speculation about his future, the sources said.

The Lakers and D'Antoni have yet to formally meet since exit meetings after the season, and sources insist no formal decision on his future has been made.

The Orange County Register reported late Friday night on its website that the Lakers had decided to retain D'Antoni for next season, noting that he has yet to be informed of the club's decision.

D'Antoni has grown frustrated with the pace of the process, believing each day that his status remains unresolved further hampers his ability to successfully perform the job next season, if he is retained.

D'Antoni is under contract for one more season at $4 million. The Lakers hold a $4 million team option on him for 2015-16.

Los Angeles went 27-55 this season, its first full campaign under D'Antoni. The Lakers posted the second-worst winning percentage (.329) in team history, the worst 82-game record in team history and their lowest win total since the franchise relocated from Minnesota.

Do Lakers Have D'Antoni In Future Plans?
Jackie MacMullen explains how the Lakers might lean towards keeping Mike D'Antoni while the team roster is in turnover.