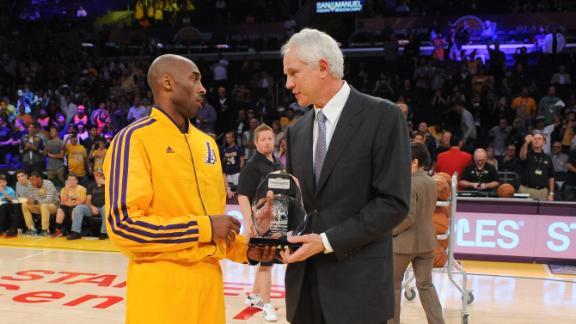 LOS ANGELES -- Kobe Bryant looks to be having an excellent anniversary trip in Paris, judging by the photos posted on his wife's Instagram account, but on the off chance he happened to be watching Lakers general manager Mitch Kupchak's 45-minute news conference Friday to close the worst season since the franchise moved to Los Angeles, there was something Kupchak really wanted him to understand.

"I've already used the word patience I think once or twice, so if [Bryant] is in Europe watching this, I'm sure he's saying, 'Why is Mitch using the word patience?'" Kupchak said. "He's not the most patient person in the world. And that's never going to change.

"Because of that, we've been to the Finals a bunch of times and we've won five championships. So, it's hard to criticize him.

"We want the same thing. We both want to win as much and as soon as possible. But it takes an organization a long time to get in the position that we're in where we have options financially going forward for the next year or two or three and we just have to make wise decisions using that space. If you don't make a wise decision, then you can set yourself back 6-7 years, and we don't want to do that."

That issue, the tug to contend for a championship during the final two seasons Bryant is under contract for and the need to take their time in wisely rebuilding the franchise through free agency and the draft, is the most important question facing the Lakers this offseason.

They'll have a lottery pick for the first time since 2005, and it will be their highest draft pick since 1982, when the Lakers took James Worthy No. 1 overall. They'll also have substantial salary cap space to build a roster around Bryant through free agency or with a high-impact trade.

But even the most talented lottery picks can take years to develop, and after four years of lining up the contracts of their best, most expensive players to expire this summer so they'd have the most flexibility, it's important to use it wisely.

"There is a degree of patience here," Kupchak said. "It's not like we've worked four years to create financial flexibility and now no matter what on July 8 we've got to spend it all or lose it all. We have to make sure that we use it wisely. If we can use it wisely right away, we will. If we have to use part of it and wait a year to use the other part of it, we'll do that."

A month ago, when his former coach Phil Jackson signed on to become the president of the New York Knicks , Bryant said he has "not one lick" of patience for a rebuild and called upon Kupchak and Lakers management to turn the team back into a championship contender as quickly as possible.

He softened some of his criticism soon after, explaining that his comments may have sounded too harsh because of the frustration he felt at sitting through a 55-loss season.

"This organization is just not going to go [down]," Bryant said in an interview with ESPN's Darren Rovell. "It's not going to take a nosedive. But I think we need to accelerate it a little bit for selfish reasons, because I want to win and I want to win next season. So, it's kind of getting them going now as opposed to two years from now."

Kupchak compared the situation to 2007, when Bryant asked to be traded after he felt Lakers management wasn't acting quickly enough to surround him with a championship roster after two straight first-round playoff exits.

The Lakers ended up trading for Pau Gasol in Feburary of the 2007-08 season and made the NBA Finals the next three seasons, winning two titles.

"I would be happy if it took the same amount of time," Kupchak said with a smile. "I don't want to put a number on the number of summers, but I believe we can. I believe this is an attractive destination. The legacy that Dr. [Jerry] Buss created with this franchise since he bought it in 1979, that goes a long way when you're out there recruiting players. I think that's a big advantage that we have."

The Lakers have only three players under contract for next season -- Bryant at $23.5 milion, Steve Nash at $9.7 million and Robert Sacre at $915,243 -- and the team has an option on young point guard Kendall Marshall for $915,243. Nick Young has a player option for $1.2 million, but he's said he's likely to opt out and test free agency.

Kupchak said the team "liked a bunch of the guys we brought in" and would be interest in re-signing them for next season, but couldn't predict which players until he had a better sense of their value on the open market. He added that it was possible for the team to use a similar strategy of signing players to one-year contracts this summer in order to maintain financial flexibility for the future.

"There's a loyalty factor," he said. "At least I've always felt that's the way this organization operated and will continue to operate that way. But there's two sides to the coin. We've always been good to players and we look to them for some loyalty, also. But the big unknown is the marketplace."

Gasol, who helped them win titles in 2009 and 2010 but has been the subject of constant trade speculation since, is an unrestricted free agent.

"Absolutely he's a priority," Kupchak said. " If you look at the free agent board or the guys who you think may be free agents, there's probably not a player as good as Pau on the board. But, you know, he's waited a bunch of years to become a free agent, and July 1 rolls around, he's going to get phone calls.

"So, we'll do our best to stay on top of it and I think Pau has a great relationship with the organization. I know he loves the city. But he'll be pursued and he'll have options, and we'll just have to see what the market place dictates, really."