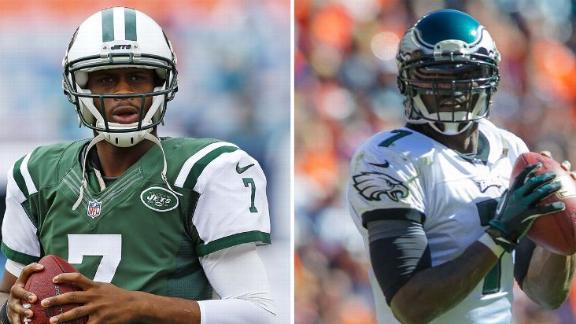 When the New York Jets begin OTA practices in a few weeks, Geno Smith will get most of the first-team reps at quarterback, not Michael Vick.

It's a potential quarterback controversy, but offensive coordinator Marty Mornhinweg doesn't see it that way. He expects a harmonious competition.

"I think this thing will work beautifully," Mornhinweg said Tuesday, speaking to reporters for the first time since Vick signed last month. "I expect Geno to progress at a high rate with Mike's help. It's just that simple."

Mornhinweg was careful not to define the players' current or future roles, but he made it clear the organization's objective is to help Smith continue the progress he showed at the end of last season.

Reading between the lines, it means the Jets hope Smith is good enough in the preseason to retain his job. Without calling Smith the starter, Mornhinweg said the second-year quarterback will be the first behind center, but it will vary on a daily basis.

"We're going to structure it a certain way," Mornhinweg said. "One thing I want to make sure of is that nothing impedes the young quarterback's progression. I'm talking about Geno. He progressed beautifully, and I'm talking the last quarter of the season. He played at a high level. "

Smith said last week he expects to be the opening-day quarterback. While hopeful that he will continue his ascent, the Jets aren't sold on him as their long-term answer. He was wildly inconsistent through his first 12 starts as a rookie. That's why they signed Vick, who worked under Mornhinweg with the Philadelphia Eagles.

Upon signing a one-year, $4 million contract, Vick conceded the starting job belongs to Smith as of now. Mornhinweg wouldn't put it that way, at least not in so many words.

"We brought Mike in to compete, to push Geno and to make Geno the very best he can be," Mornhinweg said.

At least one of Mornhinwg's former players doesn't agree. On Monday, Eagles running back LeSean McCoy told the New York Post that Vick is "way better" than Smith and will be the opening-day starter.

"I like LeSean, LeSean is one of my favorites" he said. "He had a good day media-wise, didn't he? Sounds like it."

This will be a highly scrutinized competition, and every comment will be magnified. The Jets experienced a similar situation last summer, when it was Smith and Mark Sanchez, who was replaced by Vick. Smith won by default, when Sanchez suffered a season-ending shoulder injury in the preseason.

Vick enjoyed his best season, 2010, when Mornhinweg was the Eagles' offensive coordinator, but he has suffered from durability and turnover issues, losing his job to Nick Foles last season after a hamstring injury.

Mornhinweg said he expects a "seamless transition" for Vick because he already knows the system.

The Jets' offense, which finished 31st in scoring, will have a different look. The team signed two high-profile free agents, wide receiver Eric Decker and running back Chris Johnson.

"What a great player," Mornhinweg said of Johnson. "He's certainly electric, dynamic. He has speed."

Johnson rushed for a career-low 3.9 yards per carry last season with the Tennessee Titans. Mornhinweg believes it was partly due to a torn-cartilage injury, which occurred in Week 3. His hope is that Johnson and Decker can add to the foundation the Jets set last season.

"Last year was quite possibly the start of something special," Mornhinweg said.